By Julian Mininsohn, Stephanie Ball on November 22, 2013 in Basketball, Sports 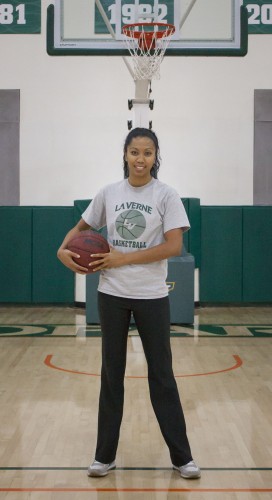 Julie Shaw is in her first year as the head coach of the women’s basketball team. Previously Shaw was the assistant coach at Gonzaga in Spokane, Wash. She coached La Verne to a 68-65 win over Willamette Nov. 15 in her first game as head coach. / photo by Stephanie Ball

The women have 10 minutes to make a certain amount of jump shots. Even if one player misses the final shot of the drill, they have to start over from zero.

“It is a challenge for them to stay mentally tough,” she said. “I want them to be prepared.”

The first year head coach is stresses playing hard, tough, smart and enthusiastically. She said it is the only way she knows how to play and coach.

“Mentally she has been pushing us a lot,” sophomore center Emily Myers said. “She expects a lot more from us.”

Shaw is in her first season at La Verne. It is her first head coaching job following a two-year stint as an assistant coach with Gonzaga.

She helped Gonzaga win the West Coast Conference both seasons, and the team went to the Sweet 16 in 2011-12.

“Once I came down I was fortunate enough to meet the team on my interview,” Shaw said. “Seeing the type of student athletes I’d be working with made it a lot easier for my decision to come here. They are hard-working and eager to learn.”

Shaw was a four-year player at UC Riverside after graduating from J.W. North High School in Riverside.

She was an All-Big West Conference honorable mention in the 2001-02 season and a member of the 2002 Big West All-Tournament Team.

Shaw also played in Portugal for one year and later served as an assistant coach at Vista del Lago High School in Moreno Valley.

Shaw was also a graduate assistant coach with Redlands from 2004-05.

Shaw then took her talents to the Division I level where she was an assistant coach for Cal Poly San Luis Obispo for six years.

“Coaching has been about the relationships I get to make with these young women and to be able to help them reach whatever goals that they want to reach as a player and in life,” Shaw said.

Outside of basketball, Shaw loves to listen to an eclectic array of music and go to concerts. From Lauryn Hill to Lorde, you will find it all on her Pandora Radio playlists.

She also enjoys traveling and hopes to visit Bali once the season is over.

“From the Division I experience she knows the physical toughness and mental toughness that it takes,” senior forward Lindsey Foster said. “She is showing us a good basis of what La Verne basketball needs to be like.”

The team went 1-1 in its season opening games as they played in Portland, Ore., last weekend.

The Leopards defeated Willamette, 68-65, Friday, followed by a 106-75 loss to Lewis and Clark on Saturday.

The Leopards’ first home game is against George Fox at 6 p.m. tonight at Frantz Athletic Court.

La Verne opens up SCIAC play at 7 p.m. on Dec. 7 on the road against Occidental.

“My ultimate goal is to set a solid foundation,” Shaw said. “I want to set a foundation and mind-set in which people are committed, motivated, dedicated, and they compete.”

“My vision is to create an impactful change to get La Verne to the next level,” she said.