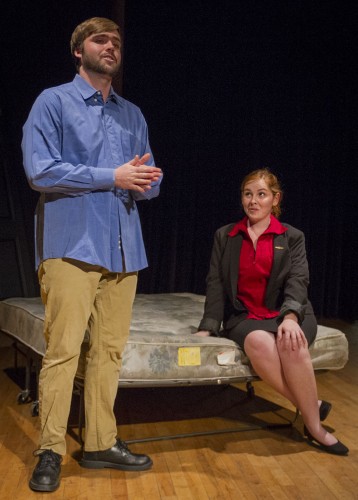 Kyle Boardman and Emily Jardel run through a scene from George Furth’s play “Company.” The theater department presents “An Evening of Directing Projects,” facilitated by Sean Dillon, which allows students to direct plays. The showcase opened Wednesday in the Jane Dibbell Cabaret. / photo by Jessica Harsen

First-time student directors put directorial principles into play by showcasing selected scenes from various plays for “An Evening of Directing Projects” at the Jane Dibbell Cabaret.

“It’s nerve wrecking to put so much of yourself into a project and then throw it out into the world to be taken by anyone willing to stop by for a look,” said Sarah Rae Jackson, senior theater and child development major. “But at the same time, it’s sort of a rush to share your work with others.”

The showcase is the final project for the students from Associate Professor of Theater Arts Sean Dillon’s Introduction to Theatrical Directing class.

“This is a good way to show what you have learned throughout the semester,” said Noelle Soto, sophomore theater major. “I like doing hands-on projects that show you know the criteria.”

The scenes varied significantly, from serious performances with darker themes to comical ones.

“I hope they understand that woman can be delicate as flowers, yet can be strong as steel when facing adversity,” McLean said. “Also, when you have positive and loving friends surrounding you, it makes your fight easier.”

The light-hearted selections, such as “The Miser,” directed by junior theater arts major Gracie Gilb, involved the actors singing and dancing around the stage and behind the curtains. Gilb also dressed up like the actors and did a short dance with them at the end.

“I want (the audience) to sit back and smile or laugh because laughter is healing,” Gilb said. “I’ve focused on having the audience see, some for the first time, including the actors in this piece, a taste of old comedy and farce mixed with a variety of vaudeville, silent movie acting, slapstick clowning, song and dance, and plain old fashioned silly entertainment.”

Opening night ended with “Pandora’s Box,” directed by Alyssa Songco, where three characters jumped out of the Pandora box. The audience screamed initially at the unexpected appearances, causing many to also laugh. The scene ended with a character named Hope giving a positive message on overcoming difficulties in life.

“I had a preconceived notion of who I wanted to cast, (but) when I saw my actors, Ariana Harris and Cody Goss, audition, they completely changed my mind and I knew in an instant that I had found the right cast,” Jackson said.

“There is a special moment for a director when you’re the only one sitting in the audience, watching your still-in-progress play on stage do something that captures the image you have for your play,” said Niki Alilovic, sophomore broadcast television major. “It’s a really satisfying and uplifting experience.”

On top of being directors, many of the student directors are also actors.

As an actress, Gilb enjoyed learning detailed techniques about theater from a different point of view as a director.

“Since I am the one with the vision, it is easy to know exactly what I want from each actor and for the audience to experience,” Gilb said.

“Having some acting experience, it has been challenging to be in the directing role working with actors and trying to showcase my vision through someone other than myself,” said Jessica Reeves, sophomore kinesiology major.

The student directors hope the audience will walk away with the different messages in the plays in mind.

“In reality, every audience member is going to read the piece differently and all I can really hope for is that at least one person feels something from this. If I can touch one person with this art, then I’ve done my job,” Jackson said.

There are 17 directors in the class and the performances are divided into two different presentations, with one on Dec. 6 and the other one on Dec. 5 and Dec. 7. Dillon’s directing class is offered year-round and open to students of all majors, with no previous directing experience needed.

“Professor Dillon is very good at teaching this class,” McLean said. “He is thorough and gives a wealth of knowledge on directing, because of his experience as a director. He had you directing very small units from various scenes, which helps and gives you a general idea as to how to direct a piece on a smaller scale.”