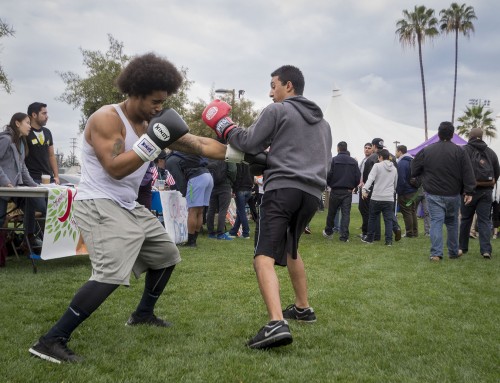 Students enjoyed a free lunch, mingled and took the opportunity to find their place among the clubs.

Among the new clubs started this semester is the Children’s Hospital National Foundation.

This club hopes to raise awareness for children’s hospitals by reaching out to the campus community with a variety of service projects.

The booth, equipped with stickers, markers and colorful paper to make Valentine’s Day cards for young patients, drew students in to help support the club.

“The most rewarding part of this club is making Valentine cards for the children and seeing people excited about making them,” Victoria Guevara, CHNF president, said.

“I love children, so I like helping them out.”

Guevara, a sophomore chemistry major, helped start this club with the desire to raise funds for Children’s Hospital Los Angeles.

The CHNF club also encourages students to get involved and visit local hospitals.

Voices In Action, a political and social activism club, has also set out to impact La Verne’s students.

The VIA, originally a class, works to raise awareness on injustices in society.

“I wanted to make a difference and make people aware of different issues that they might not know about,” Kristen Savko, VIA member, said.

They are currently working on helping adjunct professors unionize.

Another club making an effort to influence the community is the Students Engaged in Environmental Discussion and Service club.

Concerned that society views the environment as an “it” thing, SEEDS embraces the concept of “going green” as members of their club participate in hikes, beach clean ups and not using plastic bottles.

“If someone sees you do it, they replicate it,” Yunny Lopez, junior biology major, said.

Members of SEEDS hope to let people know about the environment as they are becoming more socially aware themselves.

During the fair, ASULV also announced this years headlining artist for Lavernapalooza.

Rapper Big Sean will entertain ULV students for the event in May.

ASULV also announced that the opening artist for the annual concert will be announced on a later date.

With more than 70 clubs and organizations on campus, students can to find ones that suit their interests after seeing what each one offers.

“I like the fact that it was very open and welcoming,” Mary Alvo, freshman athletic training major, said.

“Each table made strong efforts to inform individuals about their club, and they all seemed very enthusiastic about their organizations,” she said.

$5,000 worth of books stolen
Union vote for adjuncts ends today