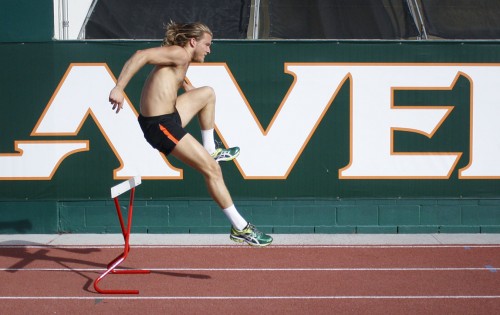 Freshman kinesiology major Jake Pavlovics practices his 110 meter hurdles for the meet Saturday at Pomona College, where he will compete in the Pomona All-Corners decathlon. The Leopards’ first home meet will be March 1. / photo by Austen Beck

The University of La Verne track and field team is in session and coaching staff are motivated and are poised to conquer the Southern California Intercolleg­iate Athletic Conference.

“This is a real exciting season, we have over 100 people out on the team and there is a lot excitement going on with this team,” head coach Pat Widolff said.

Widolff said that he was very excited about the freshman newcomers.

Since the season is just beginning, Widolff is still looking and trying to figure out if there are any freshman standouts.

Widolff also mentioned that he is excited about returning All-Americans: Senior Chancise Watkins, who received an All-American honors in the 400 Meters, Lenore Moreno, the only women’s cross country runner to go to national and Jared Manke, who earned All-America honors as a freshman in 2011.

On Feb. 1, the track and field team competed in their first competitive meet of the season in a dual meet with Biola.

“The meet went well and the times were OK, however it is early and by April the times will be amazing,” Widolff said.

On Feb. 8, the teams traveled to Flagstaff, Ariz. to attend the Mountain T’s Indoor Invitational hosted by Northern Arizona.

Widolff was very eager about this meet. The track and field teams participate in this meet every other year, however they did not attend last year.

La Verne was the only Division III school within all Division I competitors.

Two spotlight players of this event were Moreno, a reigning All-American in the 10,000 meter run outdoors, who claimed the 3,000 meter with a national qualifying mark of 10:28.74.

Second was Watkins who ran a 21.65 in the 200 meter, also a national qualifying mark, and finished second.

Widolff set specific goals for the players to accomplish for the season.

“I want us to get to the top three in the conference both men and women,” Widolff said. “And we want all four relay teams (two men and two women) to qualify for nationals.”

Along with the coaching staff, a few of the players set their own goals to accomplish for the season.

Their goals were related to their specific events from improving their times to accomplishing new records.

“My goals are to make it to nationals and become an All-American,” freshman runner Jason Nicholls said.