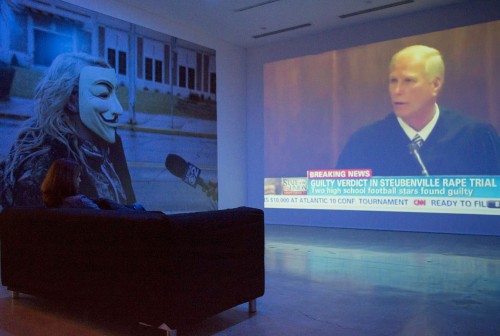 A solitary black sofa in the center of the gallery’s squared space allows the exhibit’s visitors to view the multimedia piece by artist Andrea Bowers. The exhibit titled “#sweetjane” highlights the Steubenville, Ohio, high school rape case and trial through a series of documented photos and video clips of the trial proceedings and protests by the activist group Anonymous. Bowers’ work is a part of “Project Series 48” at the Pomona College Museum of Art, which will run through April 13. / photo by Amanda Nieto

Issues of rape culture in the media were addressed in Pomona College Museum of Art’s latest exhibition, “Project Series 48: #sweetjane” by artist Andrea Bowers on Feb. 27.

“#Sweetjane” brings awareness to a rape incident that happened in Steubenville, Ohio, two years ago.

A 16-year-old girl was sexually assaulted by several high school football players and was publicly ridiculed on social media, resulting in national coverage.

“It can touch a town as small as Steubenville, but it can also be relative in a town like Claremont or La Verne,” Bae said.

“I think the reason why it’s streamline is because of media and the way women are portrayed, thus is this creation of ‘rape culture,’” she said.

A zine workshop in conjunction with the exhibit welcomed guests to tables filled with snacks, sharpies and colored pencils in every color, magazines and all the basic art supplies an amateur artist could imagine.

A zine, short for magazine, is a culmination of self-published work reproduced by texts and images.

Participants were given simple instructions: to explore what rape culture meant to them by decorating blank pieces of paper with the provided array of supplies.

“The final culminating zine is going to be a compilation of various ideas and submissions by the participants,” Bae said.

The workshop was part of Art After Hours, a program that engages the community with workshops, lectures, live music, tours and performances alongside the exhibits themselves.

“I wanted to check out Art After Hours and happened to stumble upon the workshop,” said Shaun Devera, Upland resident.

“The idea of the activity had enticed me besides the free food, easy access to materials, straightforward directions and room for creativity, all which made it pretty fun,” he said.

Informational tables including pamphlets on STDs, dating violence and Planned Parenthood were available in the workshop to increase awareness of consensual and nonconsensual sex.

Guests had the option of participating in the workshop or just seeing the exhibit.

The installation was featured in one faintly lit room, with fours walls covered in massive photos and videos relating to the trial.

The photos were of a group called Anonymous, named for their exclusive masks and protests against the rape of “Jane Doe.”

Anonymous is an unidentified international group of “hactivists” that are known for hacking school, corporate, government and religious websites who go by the motto, “we do not forgive, we do not forget. Expect us.”

The videos provided an accurate and firsthand depiction of the trial and its nationwide spread through news clips, a home video from the convicted rapists and protests from Anonymous.

The exhibit itself provoked a poignant message about the consequences of rape, both to the victims and the perpetrators.

It was stark contrast to the vibrant workshop which depicted a more uplifting message, raising awareness and enacting change in the community on rape culture.

“Great artists examine humanity and shed light on our behavior that gets us to think about ourselves and how we relate to one another,” said Cynthia Madrigal, security information officer.

“I think it’s important for all artists to be able to do that, and Andrea Bowers does it very powerfully,” she said.

A solid black couch was placed in the center of the room, intended for guests to sit and watch the videos, serving as a focal point in the exhibit.

“This exhibit covers a very important issue, and I wish for it to be in all college and high school curriculums,” Madrigal said.

This exhibit will continue through April 13 at Pomona College Museum of Art and March 28 at Pitzer College Art Galleries.