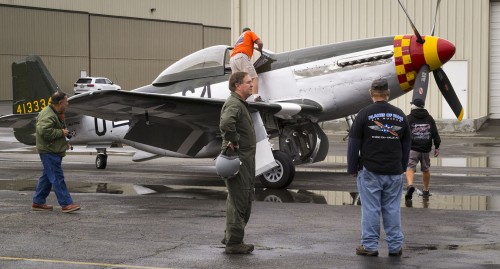 Pilot Mark Moodie prepares to fly in Wee Willy II for the flight demonstration at the Planes of Fame Museum in Chino. The flight demonstration came after World War II veterans Capt. Wayne L. Coleman and Lt. Raymond Biel discussed their experience flying long-range escort missions in Europe, and their role in dropping the atomic bomb over Hiroshima. / photo by Julian Burrell

The Planes of Fame Air Museum in Chino invited two World War II Air Force veterans to speak on Saturday March 1, each telling their own personal stories of the battles they fought in France, Russia and Japan.

WWII, the deadliest conflict to date, eventually splitting the world into alliances. The war resulted in the fall of the Axis Powers, the creation of the United Nations and the start of the Cold War.

An estimated 50 million to 85 million deaths occurred during the war.

Coleman told his emotional story of being drafted at the age of 17, requiring him to leave home fresh out of high school.

“I was forced to become an Air Force pilot under the orders of the U.S. Army,” Coleman said. “And with minimal training, I was sent to France to lead an entire squadron.”

Near the end of the war, Coleman and his base were bombed in a Russian airfield. They were left without food and water until another U.S. plane was able to rescue them.

“I don’t know how we did it,” Coleman said. “We took off before the sun was out, barely any fuel and only the plane’s headlights. I said a few Hail Mary’s and off we went.”

Coleman continued to fly missions in France and Russia, where he led soldiers into various battles until 1945.

“World War II veterans are part of the greatest generation that ever lived,” said warplane enthusiast Anthony Guerra from Whittier.

“The respect I have for them is great because they were hands on leaders and they’re very inspirational.”

The second speaker, Biel, was 18 years old when he was drafted in 1941. He initially dreaded the thought of enlisting.

“I only wanted to graduate college because I had to have a degree so my girlfriend’s parents would give me permission to marry her. But I went anyway, mostly because I had to.”

After basic training, he was sent to Hiroshima and Nagasaki on a top-secret mission as a co-pilot.In August 1945, Biel and his crew flew over Nagasaki for a special weather briefing for that week’s secret assignment. He later found out the weather report was for the pilots who would drop the atomic bomb over Nagasaki.

Biel and his crew were then assigned their next mission on August 6, 1945: drop an atomic bomb over Hiroshima.

“All of Hiroshima was taken out,” Biel said. “The entire city was gone.”

Biel was eventually discharged, allowing him to purse his goal of finishing college with a degree in dentistry and marrying his girlfriend.

World War II buff Sarah Gillespie from Chino was intrigued by the stories.

“I’ve loved this time period since I was little,” Gillespie said. “I think because my dad was a World War II general, so I’ve heard a lot of stories. Their stories were moving and I’m so glad I got to hear them speak.”

“I wish more people could see how fascinating this time period was and that they appreciated things like the two speakers from today,” Hernandez said. “Because soon all of those people will be passed and we’ll only have books left, retelling these stories.”