By Kristine Delgadillo, Stephanie Ball on April 18, 2014 in News 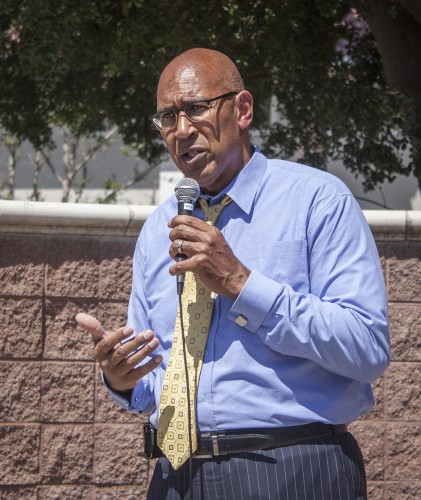 State Assemblyman and Majority Whip Chris Holden, D-Claremont, spoke about his many political goals and plans including creating public transportation to link the Inland Empire to the Los Angeles International Airport. Holden’s April 11 talk was co-sponsored by the The University of La Verne College Democrats and the Democrats of the Claremont Colleges. / photo by Stephanie Ball

The University of La Verne College Democrats and the Democrats of the Claremont Colleges held a meet-and-greet event April 11 with guest speaker state Assemblyman Chris Holden, D-Claremont, in the Hanawalt House Courtyard.

This event marked the second time Holden came to speak at the University.

“We wanted to host this event so that Mr. Holden could update us on what he has accomplished in his term,” said president of the ULV College Democrats club, junior political science major Anthony Reyes.

“Also, so that he could hear from his constituents what exactly we want him to work towards in his second term.”

Holden, the Assembly Majority Whip, represents the 41st district, which also includes much of northern San Gabriel Valley and the San Gabriel Mountains.

Holden informed the students of the work he has accomplished in the last two years for public education.

Holden has adjusted his concentrations to fit many students in the 41st district since his last visit to ULV.

“I was happy with Mr. Holden’s legislative report and I am hopeful that he will continue serving as well as he has,” Reyes said.

The students who came to the meet-and-greet were satisfied with the event and the care Holden showed toward the students.

“I really think more students should be involved and see that people are here to listen to our concerns and they are here for a reason,” said sophomore business administrations major Jacqueline Perez. “We should all take advantage of these opportunities and take time to learn about what’s going on in our communities.”

Holden said he was pleased to see students attend the event and learn about politics.

“I look around and see so many young activists getting involved, and I am very pleased,” Holden said. “We are here to make sure we are communicating issues that pertain to you students and all of your needs.”