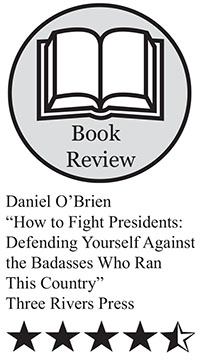 Have you ever wondered what it would be like to battle one-on-one with the most powerful men in history? Punch Richard Nixon in that long Tricky Dicky nose or kick slavery loving Franklin Pierce in that pretty boy face of his. If your answer is yes then Cracked.com’s Daniel O’Brien has the right book in mind for you.

“How to Fight Presidents: Defending Yourself Against the Badasses Who Ran This Country” is a humorist’s guide to battling the mostly brave and some wimpy presidents who made our country great.

O’Brien became fascinated with these great leaders in history after having a professor at Rutgers University tell the class not one of them would ever become president. When O’Brien questioned the cynic professor’s doubts on his future career as one of the greatest men in history, the tenured professor responded by saying no president has ever gone to class in pajamas. Then adding salt to injury gave O’Brien a nickname, P.J. Pete. Even though his first name is Daniel.

The 28-year-old humorist author doubts he will ever become president but that has not stopped him from reading and writing as much as he could on the topic of POTUS. The idea for writing a book on fighting presidents came after articles like “The Five Most Badass Presidents of All-Time,” “How to Kidnap the President’s Daughter,” and “How to Fight Andrew Jackson: The Deadliest President Ever” were featured on Cracked. Forbes announced the Crown Publishing Group offered O’Brien nearly $100,000 for the rights to “How to Fight Presidents” promising a knock out of a book.

Even if you were alive in the 1700s you would never physically be able to fight our second president John Adams. The only way anyone could hurt him would be if Adams wanted to be injured. The man could hypnotize anyone into doing anything he wanted just by using his words.

He knew how to get into people’s brains and work them to his advantage. After meeting someone for the first time he would go home and write in his diary the characteristics of his new acquaintance. Their height, strengths, weaknesses, hobbies – anything that would later be useful if he needed this individual as an alley.

Adams was short, overweight and smoked frequently to the point where most of his teeth fell out during his presidency but that never stopped him from sounding like a master. His opponent in the Continental Congress, Pennsylvanian John Dickinson was once in a verbal fighting match with Adams. Dickinson hated war and wanted peace with Great Britain, the complete opposite of Adams. Adams’ argument was so moving that Dickinson switched sides, grabbed a gun and joined the Pennsylvania militia. Adams made a man change everything he believed in using nothing but his words.

When John Adams was the brains of the Adams family, his son, John Quincy Adams, was more of a Lurch type character – more muscle than brain. While his father was out giving everyone a good tongue lashing, John Q was left to be the man of the house.

At the age of 8 he was left to protect his mother, siblings and their home because literally outside their house the Revolutionary War was going on. This matured a young Adams to great heights, to the point he was strong enough to win a fight with a grown man. During his presidency when most of our White House residents keep dogs for a pet, Adams kept an alligator.

He exercised, swam great distances and enjoyed going on walks in the nude during zero degree weather. Being a president who goes on naked walks with a pet alligator makes John Quincy Adams one of the toughest presidents and most bizarre presidents in history. He was tough but he wasn’t the brightest of the presidents. During the end of his presidency, Adams heard that the North Pole had “mole people” occupying the icy land and thought it being a good idea to for a treaty. But was cut short after Andrew Jackson became president dissolving the committee to befriend mole people.

Rutherford Hayes was a magnet – a bullet magnet. As lieutenant colonel during the civil war, Hayes was shot at frequently. Each bullet stabbing into his body was nothing to Hayes but encouragement to keep fighting. One incident left him screaming directions to his soldiers as he lay bleeding profusely and vomit chunks all over his massive beard. Once Hayes had his horse shot right under him throwing him a long distance and having a bullet graze his skull. After regaining consciousness, Hayes shook off the daze from his head and continued fighting.

When he was a baby the doctors told his mother he had an incurable disease and he would not make it to adolescence. His mother never cared to show any affection because she knew he would be dead soon and did not want to get attached to her nearly dead son. But Hayes beat the odds as a child and continued to do so even up to his death.

While traveling to Cleveland on a train, Hayes felt a sharp pain in his chest. He decided to ignore it and continued to sip his brandy. Three days later Hayes died in his home. Historians later did an autopsy of his body to find out he had suffered a heart attack on the train, self-cured it with alcohol and walked it off. He walked off a heart attack! Think that next time you stub your toe.

Roosevelt is described as a real life Batman, forcing himself to take whatever path seemed harshest and incredibly dangerous while surrounding himself with utter terror.

Roosevelt was born a sick child and nobody thought he would ever live. When it came to medicating his diseases, Roosevelt’s father would give him a cigar when his asthma acted up and the chest rubs he received by his mother would often cause him to spit up blood. Roosevelt was being trained to become a super human.

He grew up tough to the point where most men feared him. Once an unknowing man with two guns approached Roosevelt in a saloon and called him “Four Eyes” demanding he buy everyone a drink. Roosevelt tried to ignore the imbecilic but he kept poking the lion. Roosevelt knocked him out with three quick punches knocking the armed man down.

After waking up the next morning, the man in fear skipped town never to be heard from again.

It is impossible to battle Roosevelt because he is the toughest man around. What is worse than a tough man? A man who can never die which O’Brien covers in the book. Zombie Teddy Roosevelt is a bonus chapter for anyone interested in all things Teddy.

When searching for books to review for the Campus Times this one sounded the most promising. “How to Fight Presidents: Defending Yourself Against the Badasses Who Ran This Country” gets a four and a half stars out of five because O’Brien took a topic like history and incorporated a great deal of fun and humor into it.

This book will not disappoint regardless of your major or even your background. Learning about historians such as our presidents and the incredible things they have done is a fun read when there is humor involved and O’Brien knows how to incorporate the two. With illustrations by Winston Rowntree, the book allows the reader to get an entertaining cartoon of each president embarking on one of their historical journies.

No living presidents are included in the book because O’Brien landed into a heap of trouble with the secret service after publishing his article “How to Kidnap the President’s Daughter.” Because the book is a guide on how to pinpoint the weaknesses of certain presidents and figure out if you can win a fight between any one of them, O’Brien has left out all living presidents.

“How to Fight Presidents: Defending Yourself Against the Badasses Who Ran This Country” is available now at major retail stores and Amazon retailing at $15.

Davis has golf team on the rise
Powwow honors ancestry