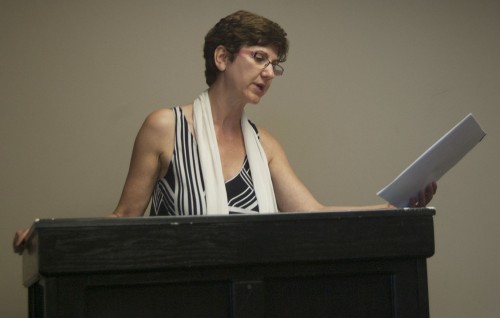 Gabriela Capraroiu, associate professor of Spanish, discusses how the Cold War changed culture in her lecture titled, “Hispanic Writers and the Cold War: Memory and the Cultural Politics of Translations in Romania” during the faculty lecture in the President’s Dining Room on Monday. She emphasized the importance of translating literature to preserve culture. / photo by Katie Madden

Gabriela Capraroiu, associate professor of Spanish, presented “Hispanic Writers and the Cold War: Memory and the Cultural Politics of Translation in Romania” Monday in the President’s Dining Room.

About 17 students and faculty attended the lecture to hear Capraroiu discuss writers from the Cold War, who got their works published and translated into different languages.

“The point of the lecture is to expose the audience to the current book I’m working on,” Capraroiu said. “To let my colleagues know information about the project and its findings.”

“Hispanic Writers and the Cold War” examines the participation of four Spanish and Latin American writers in a translation program implemented in Romania during the Cold War years.

The writers established a literary-political connection with the writers’ union in Romania and accepted the invitation to translate major Romanian works into Spanish, and write travel books about Romania.

Translating acted as a mediator or a connection between the cultures.

The Romanian and Hispanic connection attracted a lot of critical attention. The attachment of the project to national political interests has also raised questions about the literary value of the works.

Critics have addressed the ethic-aesthetic problem from an either/or perspective, and have seen an example of literature produced exclusively under the banner of propaganda in the Romanian translation project.

“My claim is that by translating Romanian modernism, Alberti, León, Neruda, and Asturias created literary works that complied with ideological premises while, at the same time, translation and travel writing allowed them to perform a spiral return to earlier inquiries that developed outside the frame of future social engagement,” Capraroiu said.

Also mentioned in the lecture was a list of four chapters that talks about the experiences with the authors, the translations and the Cold War.

After she presented her research, there was a question and answer sessions.

Capraroiu explained how the Romanian works were at first translated to French, then to Spanish.

“I feel like it was interesting that she connected translations with cultures,” said sophomore creative writing major Brittney Britt.

Capraroiu, who came to La Verne in 2006, has established an impressive research and publication record in the fields of Spanish and Latin American literature, modernism studies and comparative literature.

She is recognized internationally for her work in these areas.

“It is fascinating material, we are very fortunate to have a faculty member with this much expertise, and her international background is a real advantage,” said Professor of Music Kathleen Lamkin, who attended the lecture.

“She is so academically involved and recognized throughout the world.”

Capraroiu has presented her research at numerous prestigious conferences and seminars throughout the world including Bilgi University in Istanbul, Turkey, Harvard University, and at the Sorbonne in Paris.