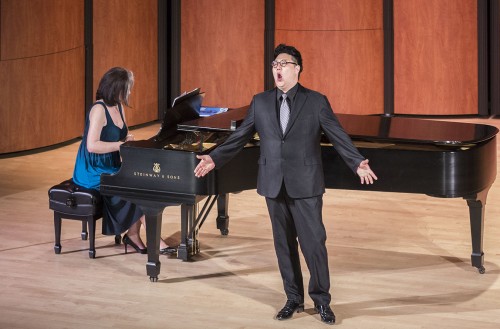 Kihun Yoon, the only baritone from the group of five singing in Sunday’s performance, presents the opening song. Pianist and head coach Nino Sanikidze summarized the numbers to give the audience context and background, as the opera songs were not in English. This performance of Sundays at the Morgan featured four other artists of the LA Opera’s Domingo-Colburn-Stein Young Artists, all of which sang “Libiamo ne’ lieti calici” known as the “Drinking Song” from La Traviata for the closing number. / photo by Helen Arase

The Domingo-Colburn-Stein Young Artist Program supports young singers from around the world with paid residency and professional development for a career in opera. Opportunities include mainstage roles performances, covering principle roles and appearances in concerts and productions.

Five opera singers performed, accompanied by Nino Sanikidze on piano. Sanikidze is from Tbilisi, Georgia, and she is an alumna and head coach for the Domingo-Colburn-Stein Young Artist Program. She has been the official pianist for Plácido Domingo’s World Opera Competition, Operalia, since 2008.

“I thought it was amazing and the singers were really incredible,” said McKinley Pollock, senior television broadcast major. “For the very first act (Kihun Yoon), I was just blown away. I knew it would be good but I didn’t expect it to be that good, with the way his voice just filled up the whole room and there was such raw power behind it. I’m taking singing lessons so (the recital) makes me appreciate music even more.”

Kihun Yoon, a baritone from Seoul, South Korea, started the recital with a passionate piece. His powerful voice contrasted well with the soft sounds of the piano. The piece shifted tempos and became upbeat as the piece progressed.

Yoon performed in the Korean Broadcasting System New Year’s concert in 2011, and he also appeared in a gala concert for the National Opera of Korea and the 2012 Busan Singer Festival in Korea. Yoon also performed a second solo about how kings and queens do not necessarily deserve their positions. He used hand gestures to depict sorrow and determination and his voice captured the audience with a revolutionary feel.

Vladimir Dmitruk, a tenor from Minsk, Belarus, performed after Yoon.

His performance was a slow and emotional piece about a hero asking if he would be remembered after his death.

Dmitruk expressed the emotions through his sentimental gaze and passionate voice. Dmitruk was the winner of the Irina Bogacheva International Voice Competition in St. Petersburg in 2011 and the CulturArte Prize at Operalia in 2013.

A mezzo-soprano from Mexico City, Mexico, Cassandra Zoé Velasco, performed a light-hearted solo about a girl falling in love with a boy and they eloped. However, the boy ends up liking another girl in the village, and Velasco was able to depict the story through shifts in the tempo and her obvious change in facial expressions.

Velasco had many roles in Mexico City, such as the title role in “La Cenerentola.” She also appeared in Catán’s “La Hija de Rappaccini” with Gotham Chamber Opera with performances in New York, Venice and the Greystone Mansion in Beverly Hills.

Amanda Woodbury, a soprano from Crestwood, Kentucky, performed a duet with Hae Ji Chang, a soprano from Seoul, South Korea, after Velasco. Woodbury is the 2014 winner of the Metropolitan Opera National Council Auditions and she will be making her May Festival debut in Mahler’s Symphony No. 8 this spring and Chang is the 2013 winner of the Pepita Embil Domingo Zarzuela Prize at Operalia 2013. She had her Carnegie Hall debut as a soloist with the Baltimore Symphony Orchestra.

In addition to the duet, the two singers also performed solos. Woodbury performed an expressive solo using a wide range of emotions to express a sense of shock, happiness, dismay and sorrow. Her hand gestures and movements helped portray the different feelings throughout the piece. Chang sang a lively solo about the love of oneself. She showcased confidence and pride by smiling frequently throughout the piece and with the uplifting tone of her voice.

Velasco sang a solo similar to Chang’s in terms of portraying self-confidence and pride in oneself. Velasco and Chang also performed a prayer song with clasped hands as a duet. Although the piece was short, their harmonizing voices were very impactful and effectively presented their emotions.

“I think their facial expressions were very well,” said Chonghui Xu, masters of accounting student, said. “I liked (Chang), she always smiles and I like that.”

Yoon and Dmitruk also performed a duet together. Their piece was about male friendship and the singers depicted it with their powerful voices that harmonized suitably. They joined hands to physically express the friendship and ended the performance with a hug.

The opera singers ended the recital with a final piece with all five singing a toast to drink, relieve and be happy.

“I thought it was really, really good and professional,” said Levi Reed, senior music major and a student worker at the Morgan Auditorium. “I liked the finale, it was more energetic and exciting in general.”