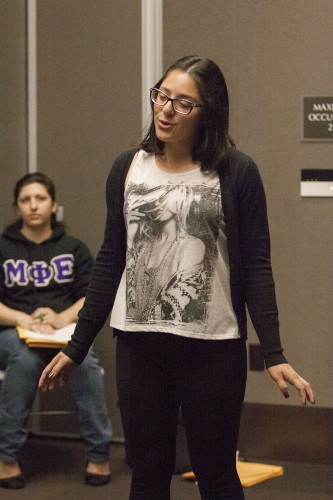 Freshman biology major Abril Casillas sings a Bruno Mars song at day one of La Verne Idol auditions March 26. Casillas got the “golden ticket” to go on to the next stage of the competition. The finals will be April 17. / photo by Stephanie Ball

Singing in front of judges for the first time may not be the easiest thing to do, but for University of La Verne students, it was a chance to test their skills at the La Verne Idol auditions.

“My friends told me about the auditions and said I should give it a try, so that’s what brought me here,” freshman biology major Abril Casillas said.

Casillas entered the audition with a confident smile on her face, but soon stumbled on her words during her performance of “Just The Way You Are” by Bruno Mars.

The three judges, Mu Phi Epsilon members themselves, calmed her down and let her start again with another song, “Breathe (2 AM)” by Anna Nalick.

Casillas left the audition disappointed that she did not make it, but the judges saw potential in her and asked her to come back again on Friday to re-audition with a song closer to her niche.

“I’m definitely going to come back next year, and really appreciate the feedback they gave me,” Casillas said.

Paolo Kespradit, senior music major and judge, created La Verne Idol his freshman year as a way to get students from all types of majors actively involved in music.

“We created this as an outreach for students to express themselves musically, and love finding new hidden talent,” Kespradit said.

A small handful of students showed up the first day to audition, but more students came toward the end of the week, especially on the last day.

“Last year we had about 50 to 60 people audition,” Kespradit said. “Half got cut during semi-finals, and we were left with the top five, in which one person takes the grand prize home.”

Semi-finals take place on April 12, followed by finals which is on April 17, in which faculty members in the music department judge the contestants.

One student is chosen to win a La Verne Idol trophy, a cash prize, and bragging rights as well.

“We look for students who are confident, and know what their voice can do,” said Kolini Coleman, Mu Phi Epsilon judge.

The judges recommend that finalists choose songs that are relatable to themselves and the audience, as it helps increase their likeability and connection to the audience.

“Our first year’s winner won with an original song, so anything can happen,” Kespradit said. “Do what your heart’s content is.”

La Verne Idol is an annual event, but Mu Phi Epsilon also holds other concerts and recitals during the school year.

“We like to keep our show diverse and give the contestants constructive criticism to improve their vocal abilities,” said Ernie Reyes, senior chorister for Mu Phi Epsilon.

“We hope to continue this as a Mu Phi La Verne tradition, and hope that more students participate in the auditions in the coming years,” he said.