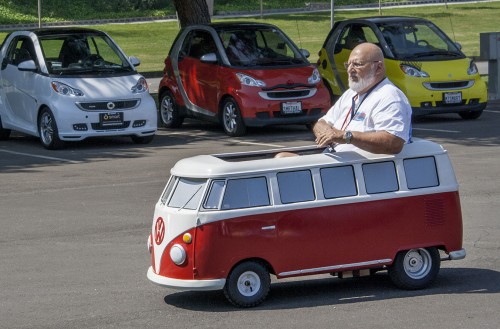 Bryan Fenwick drives his custom made scooter powered miniature Volkswagen bus at the 34th annual Southwest Unique Little Car Show on Saturday. He came all the way from Peoria, Ariz., to catch a glimpse of old classics and new models. The NHRA Motorsports Museum in Pomona hosted the event last weekend. / photo by Veronica Orozco

The front and back lots of the museum were filled with unusual small-engine cars and their owners who observed and showed off their unique automobiles.

“I am really excited for this car show and to see my 1954 First Series Crosley out there with the other unique cars,” said Kevin O’Connell, one of the car show participants who came all the way from Tucson, Ariz.

Car owners came from across the United States to enter their cars in the annual show.

The show had approximately 100 cars registered, each one varying in color, model, make and year.

The cars were sectioned off into different categories that featured vehicles such as the three to four wheel microcars and mini cars such as original Mini Coopers, Nash Metro­politans and other rare vehicles.

Most of the car owners who registered were NHRA race car drivers themselves.

“I grew up on drag racing and off-roading so I am really into cars in general,” said O’Connell.

“My husband and I rebuilt our car out of three other cars in a year and a half,” said King.

“We are very proud to see all of our handwork pay off and to see the car in the show.”

NHRA Museum front desk employee Sharay Steinbacher did not enter a car in the show, but was still intrigued by the cars.

“There is so much pride and joy that goes into these little unique cars and it is amazing,” said Steinbacher.

“Everyone is so proud of their cars and I love seeing other people who love cars just as much as I do.”

The NHRA Museum expects a bigger turn out for next year’s event due to the growing attention the annual show is receiving.

One Response to Little cars bring big fun to Fairplex