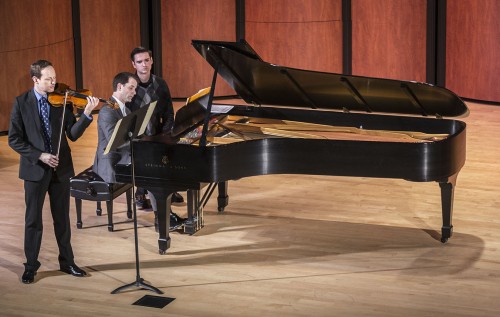 Guest pianist Timothy Durkovic and violinist Sam Fischer perform music by Franz Schubert at Sundays at the Morgan with clarinetist Phil O’Connor. Fischer prefaced this piece with background information about the composer and context on the song for the audience. Along with Schubert’s music, works by Tartini, Broughton and Stravinsky were performed. The next performance is the L.A. Opera Placido Domingo Young Opera Singers at 6 p.m. on April 13 in Morgan Auditorium. / photo by Helen Arase

Four classical music pieces echoed through Morgan Auditorium as pianist Timothy Durkovic, violinist Sam Fischer and clarinetist Phil O’Connor performed for an audience of approximately 30 at Sundays at the Morgan on March 30.

The audience clapped as Durkovic and Fischer walked on stage for their first piece, “The Devil’s Trill” for violin and piano, composed by Giuseppe Tartini and transcribed by Fritz Kreisler

Fischer explained and introduced the second piece, “Fantasy in C major” for violin and piano by Franz Schubert.

He described the lack of pauses in between movements as Schubert’s way of experimenting with form.

“It’s a fantasy, not a sonata,” Fischer said. “(Fantasy) refers to the structure of the section of the slow, medium, fast sections.”

“Traditionally, pieces he would have written were sonatas which mean there were four different movements. This piece is unusual for Schubert. There is no stopping, it just goes the whole time,” he said.

Schubert’s “Fantasy in C major” started with a fast-paced piano. Only quick shadows of Durovic’s fingers were seen as he hit every note which juxtaposed at times with a soft and slow violin. The piece continued with a range of changes in rhythm and intensity.

“Personally, the piano is like an extension of myself, that’s how I feel it,” Durkovic said. “It’s like your voice, like singers express through their bodies.”

A 10-minute intermission followed, after which clarinetist O’Connor performed alongside the musicians for the third piece, a suite from “L’Histoire du Soldat” by Igor Stravinsky.

Before the final performance, Fischer informed the audience of the presence of two special guests: film and television composer Bruce Broughton and his wife, violinist Belinda Broughton.

The last piece, “Gold Rush Songs” is an arrangement and variation on the popular songs “Joe Bower,” “Betsy from Pike” and “Golden Slippers.” The piece was composed by Broughton.

“These songs happened during the Gold Rush in 1849. ‘Joe Bowers’ and ‘Betsy from Pike’ were both songs about people who came from pike country in Ohio to work the gold fields,” Broughton said.

Durkovic and Fischer came back for an encore and performed another of Broughton’s compositions, “Silverado.” It was created for the movie of the same name for which Broughton received an Academy Award nomination for Best Original Score.

The performance received loud applauses and praise from the audience.

“There is some extraordinary talent that has come to perform. The violinist tonight was exceptional,” audience member Michael Lamkin said.

“You get the sense that it is a whole big performance but it is only two people up there,” sophomore accounting major Sher­lock Dal said. “You get the same performance from these two musicians as you would an entire orchestra.”

Dal pointed out a technical mishap during the first piece.

“The violinist’s string bow broke and he still kept playing,” he said. “I would have lost focus. I really admire that.”

But it was not a distraction or obstacle to him.

“To have a bow hair break is actually very normal and I can wait until I have a moment where I can get off then I am fine,” Fischer said.

The next Sundays at the Morgan concert will be at 6 p.m. April 13, featuring the L.A. Opera and Placido Domingo Young Opera Singers.