In honor of Cinco de Mayo, Active Runs held a Cinco de Mayo 5K run at the Fairplex on Saturday with the goal of promoting a healthy lifestyle in the Latino community.

“We’ve been getting a great outcome with runners,” Ver­onica Aguilar, an event coordinator. “It brings out the community to better their health.”

Most people who participated were not avid runners, but used the event as a step toward a more healthy lifestyle.

The runners gathered around booths and socialized under the shelter of tents to conserve energy as they waited for the race to start.

“I want to lose weight, and even though I have never run a 5K before I’m definitely going to finish this out today,” Elizabeth Hernandez, first time 5K runner and Pomona resident, said.

“I think more people should participate in it because it’s a very good thing for the community, and it’s fun.”

The weather alone was a hurdle for runners as temperatures reached up to 99 degrees during the race, forcing the runners to prepare in advance for the weather.

“I’ve been drinking a lot of water and I hope the heat doesn’t slow me down,” Rayleen Maldonado, first time 5K runner and Pomona resident, said. “It’s my first race and I haven’t really prepared, but we have a group of 10 so we will all motivate each other.”

Those from the Latino community who participated were proud to represent their culture.

Since many people at the event said they associate Cinco de Mayo with drinking, they believed a run was a refreshing new perspective and activity for the holiday.

“You can actually take pictures of this, remember it and have it be something worthwhile,” Diana Hernandez, 5K participant from Eagle Rock, said. “All Latinos should be able to do this. It promotes a more positive image of Latinos.”

Although the event promoted a healthier lifestyle, alcohol was still served at the event, bringing forward a mixed message about the event.

“People like to combine the two, so we use it as an incentive,” Aguilar said. “At the end of the race they can have a drink for those who are over 21.”

The location of the 5K was originally planned for Boyle Heights in East Los Angeles, but complications with the location caused the event to be moved to Pomona.

The change in venue did not affect the number of runners who registered, though.

“I don’t know why it changed, but the decisions were made in an appropriate amount of time and everyone was informed and knew what was going on,” said Aguilar.

Active Runs is currently planning a Dia de los Muertos 5K for October in order to promote a positive images for the Latino community. 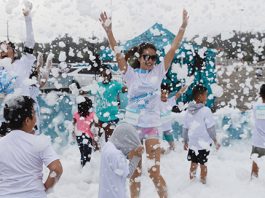