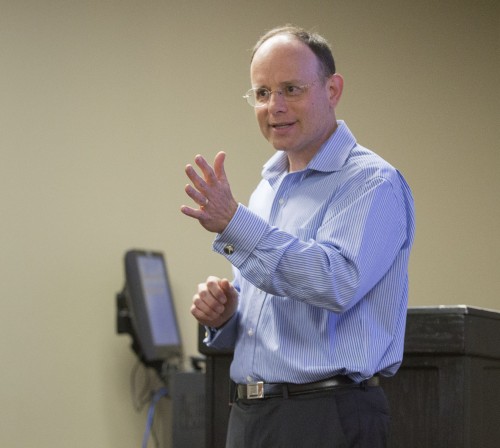 Professor of History Kenneth Marcus speaks on his recent research titled “Migration and Modernism in Los Angeles, 1900-1960,” Monday in the faculty lecture series. He focused on the effects of migration and how with it came a shift in classical music in Los Angeles. / photo by Amanda Nieto

“Before Schoenberg, Stravinsky and other modernists began writing in Los Angeles. It was … unacceptable to approach political and religious themes,” Marcus said.“Moving to Los Angeles was a fundamental transformation for the artist.”

His manuscript on Schoenberg and Southern California Modernism has been accepted for publication by Cambridge University Press.

Marcus said immigration is an essential part of United States’ history. Migration has two categories: émigrés, those who leave freely; and exiles, those who have been forced out of their country.

In 1934, Schoenberg moved to California and wanted to create a different reputation for himself.

Marcus played a snippet of a piece Schoenberg wrote in California to demonstrate how Exile impacted his musical composition.

Stravinsky was a composer for Walt Disney’s “Fantasia.”

His personal networks were mostly exiles from Russia, Austria and Germany. He also made a shift in his musical style.

“Both composers are trying things they never would have in their own countries and they are coming out of their shell in Los Angeles,” said Kathleen Lamkin, professor of music, who attended the Monday lecture.

“Stravinsky tried to sound like Schoenberg and it did not have the same impact as Schoenberg’s work,” Lamkin said.

“I thought this was a great topic for migration and new artists,” said Grace Zhao, assistant professor of music, who also attended Marcus’ lecture.

“This applies to émigrés artist who came to a place like Los Angeles wanting to change their style and ideas and to them it’s okay to say goodbye to their past.”

Marcus said Los Angeles is a city that supports the notion of reinventing oneself.

However, immigrants have to find a way to still keep their ideas.

“When people migrate into a new place they have to learn how to assimilate while still keeping their voice,” Zhao said.

Marcus is currently working on a book-length manuscript on exile and modernism.