By Austen Beck, Kat Simonelli on May 2, 2014 in Baseball, Sports 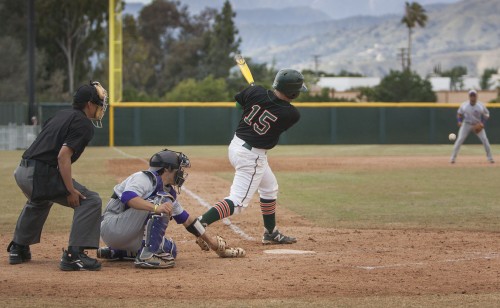 Senior catcher George Holland hits a double play grounder in the bottom of the fifth inning Saturday against Whittier. The Leopards played a split doubleheader Saturday at Ben Hines Field, facing both Pomona-Pitzer and Whittier. They beat the Sagehens in the first game, 6-3, and then won the second against Whittier, 12-2, moving them into fourth place. La Verne will play in a double elimination tournament this weekend against Cal Lutheran at 3 p.m. Friday in Thousand Oaks. / photo by Austen Beck

The baseball team won two of its three round robin games this weekend, falling back into a three-way tie for fourth place in the Southern California Inter­collegiate Conference.

The Leopards started the weekend off with two wins on Saturday at Ben Hines Field, taking game one from the Pomona-Pitzer Sagehens, 6-3, and game two from the Whittier Poets, 12-2.

“The team performed well,” assistant coach Gabriel Miranda said. “They played together as a team and did the things that they were coached to do and they minimized mistakes and just capitalized on their opportunities.”

The two teams traded runs throughout the third and fourth innings, but La Verne took control of the game in the seventh inning.

Winterburn singled down left field in the eight inning, bringing Henley in to score once again, securing the win, 6-3.

“I struggled with my command. I walked a lot of people, but my teammates made a lot of plays for me,” Jebbia said. “We had a couple of double plays, couple really good plays in the outfield and the infield. It was just a fight and we did a really good job battling.”

Game two against Whittier started off with a two-run lead for La Verne.

Henley scored on an error and White singled up the middle, allowing junior left fielder Tyler Watkins to score.

The Leopards used a big fourth inning to turn on the heat against the Poets.

Jebbia singled down to left field, allowing Espinoza to score.

Finally, Winterburn homered to left center field, bringing in Watkins to finish out the inning, with La Verne at an 8-1 advantage.

On his next at bat, Winterburn hit another home run, deep into the right field.

“My mindset was that we needed to win both games and the only way we could do that was by getting a lot of hits and being detailed, and so that’s exactly what we did,” Winterburn said.

The Leopards were victorious after eight innings with a score of 12-2 sending the third-seeded Poets home.

“It was just about taking it one at a time,” White said. “We have to win all four to get into the conference tournament, so that’s in the back of everyone’s mind. But you gotta win the first one before you win the second one so I think that was kind of the mindset.”

The Leopards went into the next game Sunday hopeful for a win, but were outhit by the Cal Lutheran Kingsmen, finishing the game with a final score of 10-5.

Cal Lutheran started off with an early 6-0 lead after a five-run third inning.

Jebbia hit his first home run of the season, bringing in Espinoza and White, but it was not enough to close the gap for the Leopards.

La Verne kept fighting, bringing in two more runs in the fifth, but Cal Lutheran’s lead was too big and they were unable to catch up.

Cal Lutheran brought in two more runs in the sixth and another in the eighth.

“Our hopes are that we go out there and we play good baseball,” Miranda said. “We love to win but more importantly we’ve just gotta go out and do things correctly, and if we do that then we have a very good chance of winning the ball games.”

The Leopards were able to secure a spot in the SCIAC playoffs after beating Caltech on Tuesday, 21-2.

In order to qualify for a spot, La Verne also needed Occidental to lose to Claremont-Mudd-Scripps.

“We’re just gonna have to be fighters, we have to fight for our win and we’re not gonna go down easily,” Henley said.

The Leopards will face Cal Lutheran again in the first round of the playoffs at 3 p.m. Friday at Ullman Stadium in Thousand Oaks.