By Alison Rodriguez, Erum Jaffrey on May 16, 2014 in Community News, News 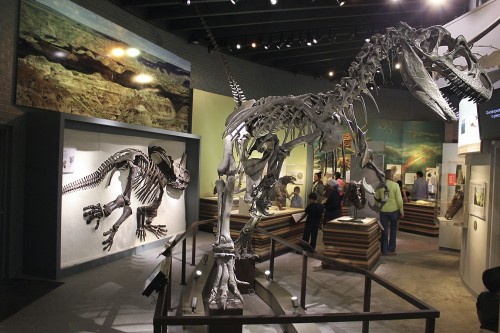 The Raymond Alf Museum of Paleontology in Claremont opened up for its monthly Family Day on Saturday. Families from all over came to look at the dinosaur and mammal fossils, listen to story time sessions, make dinosaur crafts and play in the interactive museum at the Webb Schools. The museum wanted to make learning fun and educational for children. / photo by Alison Rodriguez

The Raymond M. Alf Museum of Paleontology held the Family Science Discovery Day on Saturday, where parents and children were able to witness firsthand the history of North American mammals during the Ice Age.

Almost 2.4 million years ago, the first Ice Age began. Massive mammals trekked across the unforgiving terrain, leaving behind their fossilized remnants for paleontologists to discover.

“Today we highlighted the Ice Age fossils that we have, including a craft activity for kids that goes towards our efforts to make science educational and fun,” Kathy Sanders, director of outreach at Webb, said.

The craft activity for the day was a DIY Ice Age booklet that allowed children to color, cut and staple pictures of Ice Age animals to make their own informational book.

“I thought this would be a great educational opportunity for my little ones,” Tehmina Fasih, a Diamond Bar resident, said.

“This is their first time seeing fossils of any kind, and they really seemed to enjoy it,” she said.

Walking into the museum, visitors were guided on a path from the Precambrian and Paleozoic era to the Mesozoic and Cenozoic era.

Fully fossilized dinosaurs such as the 20 foot Centrosaurus, an herbivore and cousin of the Triceratops, were on display for visitors.

Contrary to the “do not touch” signs posted on the fossils in the exhibits, the fossil touch table provided visitors the opportunity to handle fossils of a mammoth tooth, a cat’s footprint and a turtle shell.

“The fossils on this table were found by Webb School students as part of our annual paleontology trip,” Kelsey Yang, Webb School sophomore, said.

Ninety-five percent of the fossils displayed at the museum were found and excavated from all over North America by Webb students, faculty and staff.

“Every year the freshmen take a trip up to Barstow and have the opportunity to work as real paleontologists,” Sanders said. “The museum is a great resource not only for Webb students, but also for local communities.”

A larger concentration of Ice Age fossils were displayed downstairs, where footprints, tracks and body fossils were exhibited.

A reptile trackway excavated from the Grand Canyon was on display, indicating the slow movements of the prehistoric reptiles that once roamed the Arizona desert.

“The collections of footprints and tracks we have is the most diverse and one of the largest collections in North America,” Sanders said.

Remnants of camels from around 40 million years ago were found in California, shown by the camel footprints representative of the genus Procamelus.

A full-body fossil of a bear-dog towered the floor, attracting kids with its wolf-like teeth and bear-like claws, built for speed and power when hunting.

“We’re the only accredited museum on a high school campus where students work in all aspects of museum studies in the world,” Sanders said.

“We generally get about 200 people for these days and that’s a good amount for the size of this museum.”