By Julian Mininsohn, Stephanie Ball on May 2, 2014 in Soccer, Sports 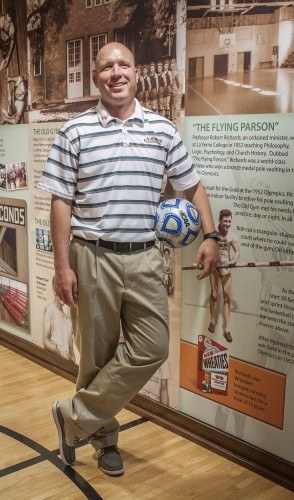 Trevor Persson has been named the new men’s soccer coach, replacing Crescencio Gonzalez after 12 years as head coach. Persson, a graduate of La Verne’s master’s program in education, has previously coached at Cal Poly Pomona and Cal State San Bernardino. He said he chose the position at La Verne because he saw the opportunity to transfer into a Division III school, and he believes this school has potential for athletic and academic excellence. / photo by Stephanie Ball

It is 9 a.m. at the University of La Verne athletic offices and Trevor Persson sits on his side of the office that he temporarily shares with Athletics Communications Director Sean Lee until his is ready for use.

He is also thinking about where he wants to travel next. From Europe to South America, he has traveled almost everywhere.

But first, work must be done.

In April, Persson was announced as the new men’s soccer head coach. He replaces Cres­cencio Gonzalez, who held the position for 12 years.

“Everything has been great,” Persson said. “Everyone is pretty nice and generous.”

He is also involved in coaching various club level teams in the area.

“I am coming in with high expectations in making the SCIAC tournament,” Persson said. “I am trying to change the mentality of some of the players here.”

“I am also coming in with a very organized and disciplined plan of action,” he said.

As a player at Cal Poly Pomona, Persson was the first All-American in school history, playing defender.

He was then drafted by the San Diego Flash, as a part of the professional A-League, which is now known as the National Premier Soccer League.

He also played for the Utah Blitzz of the USL Pro Select League, winning a national championship and earning second-team all-conference honors in 2004.

“For me, I still want to put my cleats on and come out here,” Persson said. “I look back at my playing days and I want to get back there.”

In just a few practices, Persson already has his players excited about the future of the team.

“He brings that passion and determination we need,” freshman goalkeeper Dylan Roberts said. “You can tell we are in it for the long haul.”

Besides traveling around the world, Persson enjoys fishing.

His players hope he can help reel in victories in the upcoming season.

“He brings a lot of experience,” freshman defender Saul Uribe said. “That is something we need because our team is really young.”

Persson’s goal for the program is to make reaching the Southern California Intercolleg­iate Athletic Conference tournament a habit.

“For the long haul, I want to see them make the SCIAC tournament every single year,” Persson said.

There is no question Persson is changing the pace of the men’s soccer program.

For his players’ sake, they would like to see him to pack a SCIAC championship trophy in his suitcase on his next trip overseas.