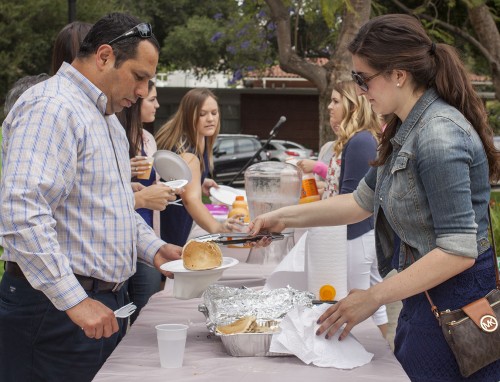 Morning clouds and electrical issues did not stop the women of Sigma Kappa sorority from serving family and friends a pancake and sausage breakfast Saturday in Sneaky Park. Sigma Stacks raised $980 for their philanthropy, the Sigma Kappa Foundation.

The sorority sisters decorated Sneaky Park with letters and other crafts, and checked in 98 guests.

“We had each girl invite family and friends, and we also extended the invite to the La Verne community members and faculty,” sophomore psychology major and vice president of philanthropic services Teresa Crum said.

“We just want them to relax and enjoy themselves,” she said.

This was the first time that the sorority hosted the event, planned by Crum.

“Everyone loves pancakes, and I feel like pancakes are an easy breakfast to make,” sophomore creative writing major Alyssa Woods said.

“It also appeals to families who want to spend time together for Mother’s Day.”

“Them doing the work shows appreciation for their families instead of them just catering,” Residence Life Coordinator and Sigma Kappa adviser Lisa Lester said.

Guests had a choice between regular and gluten free pancakes, a variety of toppings including bananas, strawberries, whipped cream and syrup, sausage, and apple or orange juice.

“It is excellent so far,” Cora Procopio, mother of Sigma Kappa president Melissa Procopio, said. “We live down the street and it was easy.”

“These kinds of campus activities make it really enjoyable – we really like that about the campus,” Gene Procopio, father of Sigma Kappa president, said. “I like the small-town community feel.”

Although the event went well, the sorority did have issues with the power outlets in Sneaky Park.

The griddles took longer than expected to heat up, and in order to keep up with the amount of hungry people, some sisters had to cook pancakes in the Vista and Stu-Han kitchens and walk them to Sneaky Park.

“I helped set up, getting the griddles going and flipping the pancakes,” sophomore business administration major Anais Hidalgo said.

“Working with the outlets is difficult. Some are damaged from the sprinklers and they keep turning off. We are powering through, though, and working with what we’ve got,” she said.

The money that Sigma Kappa raised will go to the Sigma Kappa Foundation, which benefits Alzheimer’s research, Maine Sea Coast Mission and Inherit the Earth.

“That’s a great cause and it hits home with us,” Cora Procopio said. “My husband’s grandparents had to deal with Alzheimer’s.”

Sigma Stacks was the sorority’s fourth and final philanthropy event of the year following casino night in the fall, a kickball tournament and their participation in the Alzheimer’s Walk.

“I hope the guests enjoy themselves, and I hope that the girls open a dialogue with them on why our philanthropies are so important,” Lester said.

Letter to the Editor
Baseball looks toward next season