By Keenan Gilson, Tyler Harrison on May 2, 2014 in Community News, News 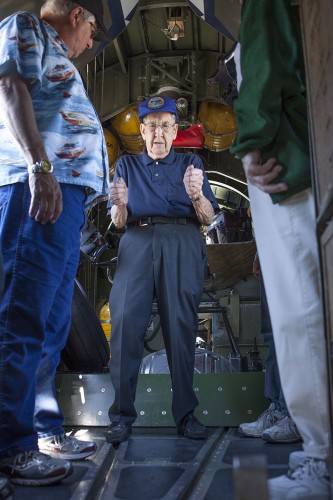 Chuck Neilson talks on Monday about his experience flying a B-17 airplane on 35 missions when he was based out of Foggia, Italy. Brackett Field hosted the Wings of Freedom Tour from Monday through Thursday and displayed three planes from World War II. / photo by Keenan Gilson

Planes from the past delighted guests at the Wings of Freedom Tour held at La Verne’s Brackett Field airport Monday through Thursday as World War II history came to life through aviation.

The tour is a traveling museum that flies to more than 100 airports throughout the United States to teach younger generations about aviation history and the role planes played in World War II.

“It’s larger than life,” Alex Camacho, an aspiring aviation student at Mount San Antonio College, said. “You see them attacking on television, but to actually get to see the guns is incredible.”

The tour is sponsored by the Collings Foundation, a non-profit organization that aims to educate people about the history of World War II through restored and operational warplanes.

Camacho said that the WWII planes played a role in inspiring him as a pilot.

The warbirds on display included a B-17 called the Nine-O-Nine, a B-24 named Witchcraft and a P-51 Mustang named Betty Jane.

The planes that were on display served mostly over Germany during the war and each has a unique history.

The B-24 was the most mass produced plane during the war, but now Witchcraft is the only one of the models in the world that is still in flying condition.

The P-51 Mustang was the only dual controlled c-model, meaning that it is a two-seater with controls that allowed the occupants of both seats to control the plane.

The B-17 had an amazing track record during World War II – not a single pilot or crew member who flew the model died while flying a mission.

Today, Nine-O-Nine is one of only four in the United States and six total in the world that still exists.

Uddgren works with the tour as the B-17’s flight engineer.

“Sweden was neutral, but this was the single most destructive event in the world,” Uddgren said. “Even though these planes are on American soil now, they did so much for history and democracy.”

Uddgren said working on these planes have given him a unique perspective of World War II.

“There is more and more of a connection as time goes on,” Uddgren said. “There was a huge amount of emotional distress for these pilots and crew. They faced enemy planes and having a gun pointed right at them. That is a huge sacrifice.”

Abernathy said he flew a B-24 on his last mission in the war.

“I have a lot of memories,” he said. “This plane protected me, but it was sometimes scary. I try to put that out of my mind and remember the good times in the military.”

Tyler Harrison can be reached at tyler.harrison@laverne.edu. 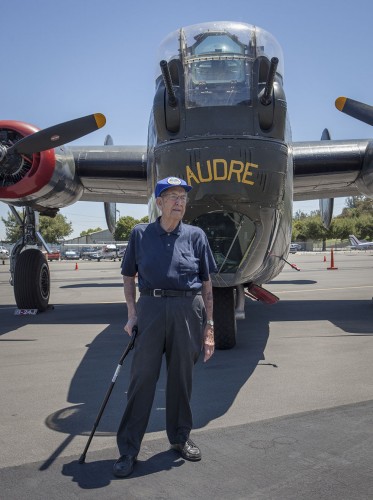 Chuck Neilson, a WWII veteran, stands in front of a B-17 at Brackett Airport during the Wings of Freedom Tour event Monday. / photo by Keenan Gilson