By Campus Times Editorial Board, Jacob Bogdanoff on September 19, 2014 in Editorials, Opinions 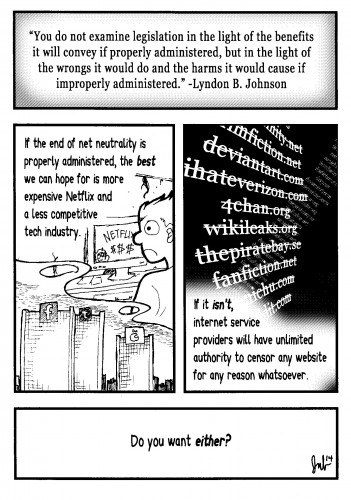 Our internet, a remarkable and game-changing platform for media, self-expression and entrepreneurship, teeters at the brink of becoming the play-thing of big business and broadband providers. The Internet can change forever since the FCC approved a proposal to completely restructure the online world.

The digital death blow comes in the form of a proposal from FCC Chairman Tom Wheeler, which suggests an entirely new Internet structure consisting of “fast lanes” and “slow lanes.” As part of the proposal, big businesses can pay to have their content jetted along the fast lanes, while smaller websites are left in the sluggish vacuum of cyberspace.

As it stands now, Wheeler’s proposal would not only end net neutrality entirely, but harm the E-landscape. The Internet we know, the one that gives passionate film students just as much opportunity as a giant studio machine, would cease to exist, leaving in its place a lopsided and uncompromising corporate playground.

Of course, this Internet dystopia will not be an overnight occurrence, but a gradual widening of the gap between big and small business until the disparities are overwhelming in their vastness.

But smaller platforms who lack the resources to carve out a niche among the big boys will falter, maybe even sputter out of existence. Websites like Kickstarter, IndieGogo, or other crowd funding sites that foster undiscovered artistic creativity will be severely hampered and, scarier still, go overlooked altogether.

A wave of protest has rocked the Internet, most of it aimed directly at the FCC. Aside from over 3.7 million public comments that crashed the FCC’s own website, popular sites like Netflix and Reddit called for a “day of action,” while celebrities also went to bat for net neutrality.

Protests like these, cyber and otherwise, need to continue to happen until Wheeler and the entire FCC reconsider the unmitigated power they are handing the already tyrannical internet service providers. The eradication of net neutrality means smaller business and media outlets like the Campus Times will be at the mercy of broadband providers, a debilitating disservice to the marketplace and the general public as we know it.