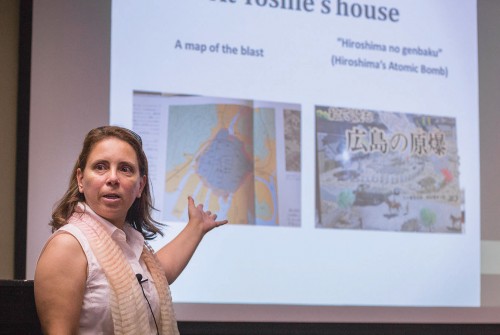 Gloria Montebruno Saller of the modern languages department points out the blast-radius of the atomic bomb dropped on Hiroshima during World War II. Saller’s lecture was titled “Atomic Bomb Survivors’ Oral Histories: Preserving the Memories of August 6, 1945.” If a person lived or was in utero, within a certain distance from the bomb or entered the most radioactive areas within two weeks of Aug. 7, 1945, the Japanese government classifies them as a survivor. / photo by Helen Arase

Gloria Montebruno Saller of the modern languages department lectured on the effects on the survivors of the atomic bombings of Hiroshima in 1945 Monday in the President’s Dining Room.

The World War II bombing by Americans on Aug. 6, 1945, cost 80,000 lives, and devastated the lives of survivors, who are still feeling the effects.

“Our own country is the only one in history that used this devastating weapon in war,” said Al Clark, professor of humanities, at the Monday lecture.

“(Montebruno) spent a great deal of time finding people to speak, because they seen this as a mark of shame,” he said.

Montebruno has traveled to Japan more than five times in the past year to collect data from survivors.

During her lecture, Montebruno showed a map of the area where the bomb was dropped, where it immediately let out radiation and lethal uranium, vaporizing or killing those in the immediate area.

Miyoshi Yoshie is an atomic bomb survivor who Montebruno interviewed. Yoshie recalled losing her brother and father that day.

Yoshie was at school the time the bomb was dropped. There was a loud noise, and teachers immediately took the children into the bomb cellar. Yoshie recalled a soldier pulling her into the cellar. Soon after, the children were released and told to go home without explanation. Yoshie found her mother covered in black soot with a morbid look on her face.

She said her mother had come home after lunch, looking pale like a ghost. Yoshie knew something happened that was going to devastate the family.

Yoshie’s mother then returned to the sight of the bombing to look for her younger son and husband.

Her husband’s body was found floating in a river.

A kind solider cremated him brought his remains back to Yoshie’s home in a soldier’s helmet. Her brother was never found and is still listed in archives as missing, Montebruno said.

Another survivor Montebruno talked about was Mito Kosei, who was in the womb at the time of the bombing but is still considered a survivor.

His mother was in the immediate area while pregnant.

His father died the day of the bombing, leaving his mother to raise an infant child.

Kosei stops by the atomic bomb dome almost daily and hands out information to tourists who visit the site.

Since retiring he likes to educate those who seek information about that tragic day.

He is currently upset that President Barack Obama has gone back on his word about atomic bomb testing, Montebruno said.

“Before traveling to Hiroshima, I always believed in the peaceful application of nuclear power,” Montebruno said. “Then I traveled to Hiroshima.”

Uranium tends to stay in the earth and give off secondary effects to those living in the areas years after the testing is done, contaminating the environment and causing patterns of health problems for those living near it. Montebruno said.

“I am one of the victims of Chernobyl,” said Montebruno, who was in Italy at the time.

Chernobyl was an explosion of a nuclear reactor in Ukraine in 1986.

Montebruno and generations of her family have thyroid problems and thyroid cancer, she said, from the Chernobyl disaster.

She said she takes the issue of atomic bombs personally and wants to inform people about the negative effects.

Montebruno said she hopes for a world without atomic bombs. She said there is no reason to have them, all they do is afflict harm. All it takes is for an earthquake to happen to release unintended harm on all in the immediate area.

“It is so important for students to hear lectures like this because it is part of the scholarship of the school,” said Felicia Beardsley, interim dean of the College of Arts and Sciences.

Russell R. Silva can be reached at russell.silva@laverne.edu.