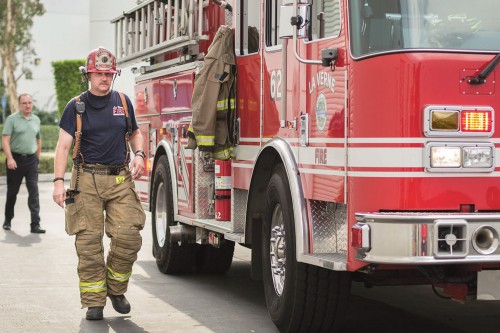 A La Verne firefighter leaves the scene of an incident in the University of La Verne’s Park Campus at Arrow Highway and Park Avenue on Tuesday. The firefighters saw no flames, only smoke caused by an electrical arc. Several University offices and departments were temporarily relocated from the Park Avenue location to the Bonita Building. / photo by Helen Arase

Human Resources, the Literacy Center and the Office of Information Technologies have been temporarily relocated for two weeks to the Bonita Building, located on the corner of Bonita Avenue and D Street, after a transformer overheated Tuesday afternoon.

The La Verne and Los Angeles County fire departments acted quickly Tuesday afternoon to prevent a fire at the Park Campus facility located next to the Shuttle Lot on Arrow Highway.

At around 2:40 p.m., a transformer located in the back of the buildings began smoking; it had apparently overheated due to high temperatures.

The temperature outside at that time was at 104 degrees.

“There was no fire, just one of the electrical vaults ended up arcing and created a large amount of smoke following that,” he said.

Electrical arcs are electrical currents and can cause fires in electrical circuits when not dealt with correctly.

The Park Campus buildings were evacuated to keep everyone safe from a potential explosion at the time.

“We were evacuated and were not able to return,” La Verne Literacy Center Coordinator Janie Stahly said.

“We had to cancel all our tutoring and classes this evening.”

After the fire departments had the area contained, they called Southern California Edison in to survey the damage.

“We required Edison to come in and shut down the power and we had units standing by on all sides in case we needed something or something went wrong,” Thompson said.

La Verne Fire Department personnel stayed behind to make sure everyone was safe and set up perimeters around the buildings.

“Engine 62 is doing their follow up to make sure there is no further heated items that could catch on fire causing electricity burns,” Thompson said.

“Something like a class A material, wood or plastic, those types of things are left to burn, so just making sure those things aren’t burning as the electricity is off.”

Exactly when the buildings will be safe for re-entry is at the discretion of Southern California Edison, electricians and Campus Safety.

“Everybody did what they were supposed to do and the fire department responded immediately and has taken control of the situation, and it looks like it’s being contained rather rapidly,” said Stanley Skipworth, director of campus safety and transportation.