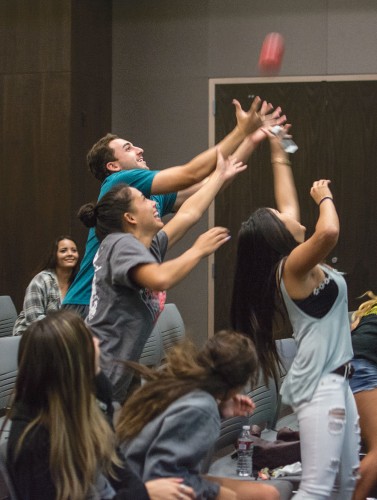 Sophomores Jason Umansky and Kimmy Kabluyen fight for control of the red ball to earn a chance to compete for $20 at CAB’s Texting Wars Sept. 11 in the Campus Center Ballroom. Contestants texted their answers to trivia questions on a variety of topics – including celebrities, music and text message lingo – to win cash prizes and a Los Angeles County Fair ticket bundle. / photo by Daniel Torres

University of La Verne students competed against each other for cash prizes to see who had the fastest thumbs and best trivia knowledge at —Texting Wars – A Night of Comedy” in the Campus Center Ballroom on Thursday night.

Free snacks were offered to attendees of the event, which was hosted by Neon Entertain­ment and planned by Campus Activities Board comedy chairwoman Emily DeStefano.

“I hire hypnotists, magicians, comedians and game show hosts as a stress reliever for the students,” DeStefano said. “If you’re having a bad day, just come here for a good laugh basically.”

Because of technical difficulties last year, the event was cancelled but everything ran smoothly this year and about 50 students attended. DeStefano hopes this can become an annual event.

In order to participate in the competition, students texted their desired nicknames to a phone number and all subsequent texts were then projected onto a screen under their chosen aliases.

Students then texted their answers to a variety of questions including, “Where was Katy Perry born?” and “Name three of the four members of the Beatles.”

The room was split into two groups and each group took turns answering the preliminary round questions.

The first person to appear on screen then moved on until four people were chosen to compete for the prize.

“Essentially, (the students) are texting a master cell phone that is connected to the computer,” Michael C. Anthony, comedian for Neon Entertainment, said.

“So when somebody texts, it comes in this master cell phone which is connected to the software and then the computer pushes (the texts) onto the screen,” he said.

The competition consisted of multiple themes that participants needed to follow in order to be eligible for the final round.

Some of them required pop culture knowledge while others simply measured the ability to search the Internet for a specific answer or text quickly without looking at the cell phone.

The prizes ranged from $5 to $20 as well as a pack of four tickets to the Los Angeles County Fair.

Everyone, even those whose texting speed were not nearly as fast enough to be considered for the competition, were given a chance at winning some money.

In between rounds, a lottery was held and a participant’s phone number was randomly selected by the computer to win $5.

The winners were alerted with a text a few seconds later notifying them that they won the lottery.

The night ended with the final championship round question, “Name any five states in the United States,” and the winner was awarded the grand prize of $50.

Whether they went home with a few extra dollars or empty-handed, everyone left laughing over hilarious typos, outrageous nicknames and ridiculous answers.

“The night was better than I expected and it was actually pretty fun,” said Ian Campos, a sophomore biology and psychology major, who won $15 from the event. “Money makes everything more fun.”