By Kat Simonelli, Megan Peralez on October 31, 2014 in Soccer, Sports 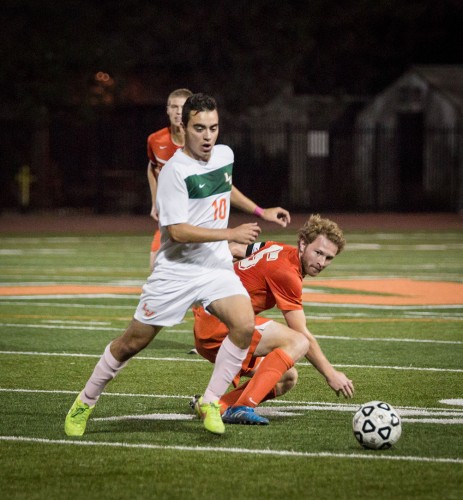 La Verne sophomore forward Nathan Gonzalez pushes his way past Caltech junior defender Teo Wilkening Monday in a drive that was later blocked. The first two goals were scored in the first seven minutes of the game by Gonzalez and sophomore midfielder Jaime Moreno. The Leopards crushed the Beavers, 6-0 at Ortmayer Stadium. / photo by Megan Peralez

Unfortunately, after Chapman and Redlands won their last two games, the Leopards were knocked out of the running for a spot.

The game got off to a quick start, after sophomore forward Nathan Gonzalez drew a penalty in the box and scored the first goal in the fourth minute.

The Leopards scored again, after freshman midfielder Auden Foxe crossed the ball to sophomore forward Saul Uribe, who tapped it in, putting the score at 3-0.

Junior forward Nick Gonsalves drew another penalty kick in the 36th minute of the game and junior midfielder Ko Yajima stepped up and put it away in the bottom left corner.

“I was just really happy, it was my first goal this season and it was a penalty shot. I wasn’t thinking I was going to kick it but I just heard coach call my name up,” Yajima said.

The fifth goal came in the second half, after freshman midfielder Javier Jasso centered the ball in toward the Caltech goalkeeper and Gonzalez was there to tap it in.

The last goal was scored in the 83rd minute when freshman forward Andrew Maldonado dribbled past a defender and crossed the ball in to sophomore midfielder Lorenzo Leyva.

“I think we came in thinking it was going to be an easy team but we still played hard as if it was any other game, so I think we did really well and stayed composed throughout the game,” Gonzalez said.

This game marked the Leopards last home game and the win left the team’s lone senior, Erik LeVay, with a good memory to take with him.

“It feels really good to win; it’s a memory I can keep for a really long time,” LeVay said. “We all played well and it was a really good result.”

“We came out with a lot of urgency and we wanted to win,” Persson said.

Uribe and Gonzalez each scored two of the four goals of the game in the win.

“I was in a drought for a while and it felt good to put the ball in the back of the net,” Uribe said.

The Leopards were also given a penalty kick in the 66th minute, which Gonzalez was able to score.

“I felt good because the last two penalties we’ve actually missed so I was really pressured to score,” Gonzalez said.

The Leopards had to watch their defense on Cal Lu plays.

“It was just up to our center mids to get the ball, turn with it and put it in to space and it really adds a different flare to our game on both sides of the pitch,” sophomore midfielder Mario Interiano said.

“Cal Lu was a very direct team, very fast on the flanks but overall I think we handled it well,” sophomore defender Ferdinand Estrada said.