By Kat Simonelli, Sonora Hernandez on October 24, 2014 in Soccer, Sports 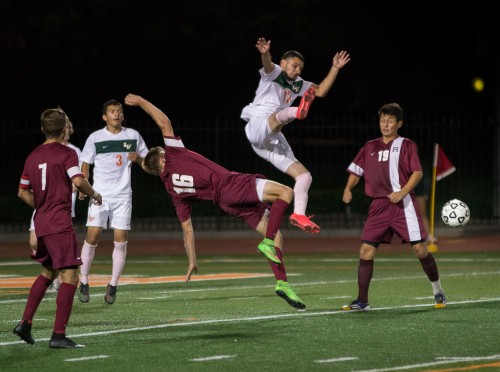 La Verne sophomore Harim Coronado volleys the ball away from Redlands Bulldogs senior Charles Izydorek after a goalie throw during the second half of Saturday’s game. The Leopards beat the Bulldogs, 2-1, at Ortmayer Stadium. / photo by Sonora Hernandez

The men’s soccer team hope to get a spot in the Southern California Intercollegiate postseason tournament, after a hard fought win, 2-1, against the Redlands Bulldogs Saturday at Ortmayer Stadium.

The Leopards stayed focused and organized throughout the game.

“We put together a complete game minus the one obvious blemish, which was the goal,” head coach Trevor Persson said. “It was a nice way for them to rebound after coming out kind of sluggish in our last game.”

Sophomore center midfielder Justin Almandinger opened up the match with a goal from about 30-yards out on a pass from freshman midfielder Auden Foxe.

Redlands freshman goalkeeper Josh Haskill could not get a hand on the ball, as it shot past him, straight into the top left corner into the net.

“I wasn’t even going to shoot it but I just decided to give it a try and it went in,” Almandinger said.

The Leopards were able to keep the game tight for the rest of the first half, but gave up a penalty kick in the 55th minute, after Redlands senior forward Charles Izydorek was taken down in the box.

Izydorek was able to slip the ball past La Verne junior goalkeeper Greg Veron, making it a tie game.

“We just let up in that couple 30 seconds that happened and we just can’t let up we just have to keep playing hard throughout the whole game,” sophomore center midfielder Ray Alcaraz said.

The opportunity to get the win finally presented itself in the 78th minute, after Almandinger won a header in the Redlands box, clearing the ball to sophomore forward Mario Interiano.

Interiano kicked the ball to Alcaraz, who scored a goal, putting La Verne back on top.

“I was actually getting ready to sub (Ray) out and he just stepped up,” Persson said. “He played a full 90 minutes and this was one of the best games I’ve seen him play.”

Alcaraz has two goals this season.

“We’ve just been going 100 percent during practice and going in hard and we’re just staying dialed in the whole time,” sophomore defender Ferdinand Estrada. “Were trying our hardest and I think it definitely showed today.”

The Leopards also lost to the Whittier Poets Wednesday at Graham Field, 2-1.

This marks Gonzalez’s eighth goal of the season.

La Verne currently sit at a 6-7 ranking in the SCIAC standings and a 9-7-1 overall.

The team will face the Cal Lutheran Kingsmen at 7 p.m. Saturday at Ortmayer Stadium.