By Julian Mininsohn, Kat Simonelli on October 10, 2014 in Soccer, Sports 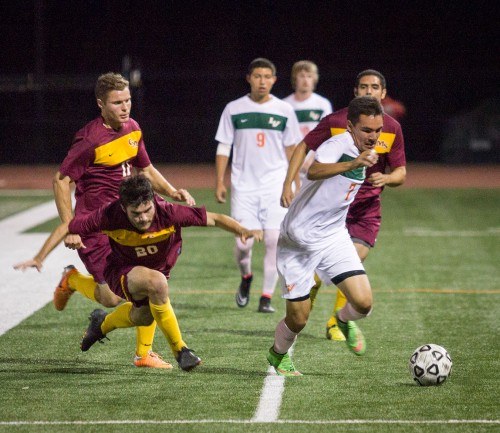 In the first half of the game sophomore forward Saul Uribe drives past three Claremont-Mudd Scripps’ defenders. Although Uribe’s attempt to score was unsuccessful, the Leopards earned a 2-0 victory over the Stags Wednesday at Ortmayer Stadium. The Leopards will travel to take on the Pomona-Pitzer Sagehens Saturday. / photo by Julian Mininsohn

“This win (against Whittier) is huge for us because this is the half way point for league and it puts us at .500 so hopefully we can just pull one or two extra wins the second round and hopefully push for the third or fourth spot in the playoffs,” graduate assistant Joshua Hill said.

The one goal of the game against Whittier came from a penalty kick taken by sophomore midfielder Justin Almandinger, after junior forward Nick Gonsalves was taken down in the box.

“Playing well was because of the whole team; they were playing well so it allowed me to play well,” Almandinger said.

Even though the Whittier game was moved to an earlier time, due to expected high temperatures, the players still powered through 90 minutes of play in what felt like 100-degree heat.

“I think there was a lot of fatigue, but I think we played really well,” sophomore forward Mario Interiano said.

“We went in and out just because you went 100 percent for like 10 minutes and then you’d get a rotation and it was just hard work that got us the win.” he said.

With a win against the Poets, the team prepared to take on CMS.

“We’re just staying dialed in,” Interiano said. “We played (Claremont) before and we had them so we know what to expect so I think we got this.”

The Leopards got on the board early, 14 minutes into the game.

Freshman midfielder Javier Jasso took the kick and played the ball in to sophomore midfielder Harim Coronado, who then headed it in past CMS sophomore goalkeeper Alex Choi.

The Leopards came out and scored again early in the second half, when sophomore forward Nathan Gonzalez sped past two CMS defenders ball into the net.

This marks Gonzalez’s seventh goal of the season.

“We tend to lose focus for a little bit and there’s usually a three to five minute spurt where we lose focus and that’s usually when the other team is most dangerous so if we can play a complete 90 minutes then I’ll be happy.” he said.

The Leopards are currently in the No. 4 spot in the Southern California Intercol­legiate Conference rankings, with a 5-4 record in SCIAC play and a 5-4-1 record overall.

The next game will be at 11 a.m. Saturday at Pomona Pitzer.