Those who are familiar with the HBO series “Girls” would know that Lena Dunham has shown viewers every side of herself.

On the show she fights with friends, experiences disapproval from her parents and literally bares all.

She now shares her life with the world in a new book called “Not That Kind of Girl: A Young Woman Tells You What She’s ‘Learned’.” 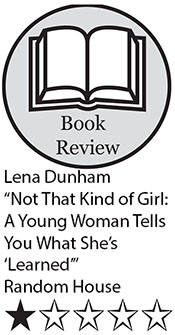 Dunham divides the book into five sections: “Love and Sex,” “Body,” “Friendship,” “Work,” and “Big Picture,” where she discusses therapy, family and her biggest regrets.

“Not That Kind of Girl” was announced two years ago and promised great tales of female empowerment, yet all we got were sad sex tales and a guide on how to molest an infant. As media has recently reported, Dunham’s relationship with her sister as described in the book is inappropriate and disturbing.

Also scattered throughout the book are tasteless jokes about rape, which question her real stance on feminism.

Taking off her top and exposing her breasts is nothing new for Dunham. Her “Girls” character, Hannah, is shown throughout the series topless in sex scenes, playing ping pong and showering with a close female friend.

Dunham credits her mother for giving her the guts to not be ashamed of her curves. During the 1970s, her mother would take a Nikon camera, set it to a timer and take self portraits.

She documented her image throughout the years as her hair grew and changed. At times, her mother was fully clothed, but most of the time, she would be naked, baring her breasts for the camera. She would be partially naked as well, with jeans and no shirt, sometimes wearing a round collared blouse with thick wool socks but no pants.

Taking “selfies” was not an easy task during the 1970s, as there was no iPhone or print preview feature. Self portraits were serious work because the images had to be her best work before printing the film by hand in her darkroom. She sometimes had to call the Kodak hotline for help.

Dunham’s mom was not afraid to show her body on camera as she documented the phases of her life. This attitude rubbed off on Dunham, who is unapologetic as she shows her naked body today. But being naked in front of a film crew is not an easy task, Dunham writes.

Though it is familiar since her college days at Oberlin College, where she did nude scenes for a project. After watching footage of herself in the scene, she says she does not love her naked body gracing over film but she does not hate it either. It is a form of art she appreciates.

When she landed the series “Girls,” Dunham said she did not want to represent millennials having sex the way they did in “Beverly Hills 90210” or other 1990s television shows.

It has to look real and the only way to make it look real is to show everything. Not an easy task to do when you are in “a room full of lights, old Italian dudes, and bad tuna sandwiches,” writes Dunham in the new book.

She describes the technical problems of sex scenes – like once when a prop condom got stuck between her butt cheeks during a scene and she did not realize it until she got home.

Another sex scene blooper was when Dunham accidentally kneed her scene partner in the testicles as they were performing a scene. Dunham says she is glad to be doing something that people refer to as different, but what irritates her is when they mention her “imperfect” body.

“I doubt Blake Lively would be subject to the same line of inquiry,” Dunham writes.

When Dunham was 4, she lied and told her preschool class her mother was pregnant. After being congratulated on a new addition to the family by her teacher, Dunham’s mother speculated that it was her daughter’s subtle way of asking for a sibling.

Two years later, Dunham’s mother announced a new baby sister would be arriving. Dunham responded with “I changed my mind.” When baby Grace arrived, Dunham had not changed her mind back. “Intruder! Return her!” she screams at the infant as she tries to sleep the first night out of the hospital. Although Dunham says she has never felt that way again toward her sister, she described Grace’s early presence like someone finding a lover in their spouse’s bed.

As Grace got older, Dunham described the different ways she began to bribe her into doing things for her. “Anything a sexual predator might do to woo a small suburban girl I was trying,” Dunham writes.

Dunham used quarters to bribe her sister into letting her put makeup on her and used candy to get Grace to let her kiss on the lips for five seconds. At one point, she mentions her fascination with the way vaginas look.

Her mother told her everyone’s is different, which sparked Dunham to look at her 1-year-old sister’s. She describes spreading the infant’s vagina to study it, and she describes lodging pebbles in her sister’s vagina. When Dunham was in the third grade, her sister began to ask to sleep in the same bed with her.

Dunham loved having her sister to sleep with but did not want anyone to know how much she liked it. She describes complaining about the sleeping situations to her father but secretly loving it at the same time.

Dunham’s sister came out to her as a lesbian when she was 17 and Dunham was 23, which made Dunham cry because Grace hadn’t told her before. Dunham claims the fact that her sister would keep something from her would cause them to grow further apart.

Dunham’s mother had a similar reaction when she outed her sister to their mother , who wondered if Grace was keeping any secrets from her.

Ultimately “Not That Kind of Girl” leaves much to be desired. Dunham’s book is as pretentious as it is offensive. When a young Dunham describes her first experience with a computer, she says how she refused to conform to technology and ran home to watch her portable black and white television set.

Her hipster persona leaks into her choice of food. Every meal either has the words “gluten-free” or “organic” attached to it. Dunham stumbles throughout the entire book worse than a crack head that snorted an entire bag of an eight ball. Her writing is disjointed and the often digresses in to almost stream of consciousness.

Then of course there are the disturbing matters of her own childhood sexual deviance to which she applies no adult perspective. Dunham’s strange relationship with her sister does not sound like a normal sisterhood but more of a crazy obsession.

Dunham claims to be a liberal feminist, but her actions described in the book make her far from it.

Great women such Gloria Steinem and Hillary Clinton have contributed a great deal toward promoting positive self image in girls. “Not That Kind of Girl” gives ammunition to misogynists like Phyllis Schlafly and Anne Coulter, who claim feminism leads to child abuse.

There is no possible way I can rate this book any higher than one star. Dunham’s sad attempt at shock value is pathetic and would make John Waters roll his eyes.

“Not That Kind of Girl: A Young Woman Tells You What She’s ‘Learned’” is now available at major retail bookstores and on Amazon retailing at $28.

Photographs tell stories of lucky winners
Letter to the Editor