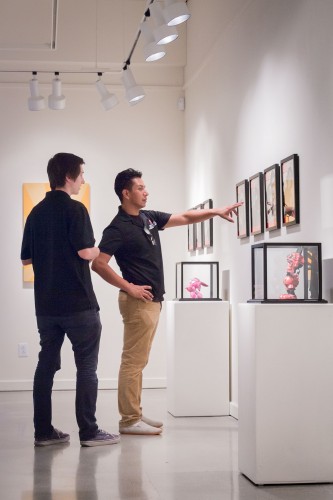 Azusa Pacific University is hosting “Gift,” an art exhibit of works by David Flores. Junior Warner Trejo and senior Joey Antos of Azusa Pacific University discuss Flores’ portraits of celebrity icons, such as Disney’s Mickey Mouse and Thumper. “Gift” will be on display in the Duke Gallery through Dec. 12. / photo by Megan Peralez

Azusa Pacific University has invited David Flores to exhibit “Gift” on campus, which consists of three parts: a William Shakespeare mural, the “Gift” exhibit and a book about Flores’ career published by APU.

Flores is a Los Angeles artist, designer and muralist who is popular for his stained glass style, a term he coined himself, said Stephen Childs, associate art professor and curator of the “Gift” exhibit.

The individuals on the cover all had mosaic designs on their faces. The most prominent features, which included the eyes, nose, lips, cheekbones, neck and collarbone were all outlined and each had a different pattern.

Several of his designed skateboards were pinned to the wall and his vinyl toys stood inside glass cases.

One of the vinyl toys, “Deadhead,” sat in one of the corners of the exhibit and was a modified version of Disney’s Mickey Mouse.

“I love Disney so that aspect really caught my attention,” said Natasha Loviero, APU sophomore liberal studies major. “The layout of the exhibit is well thought out and it’s great.”

Flores also painted a mural-seized portrait of Shakespeare on the side of the Azusa Pacific theater, which will remain there permanently.

Flores created “Icons” as a way to respectfully honor influential people of the past and present.

After graduating with a degree in graphic design, Flores became a freelance illustrator for various skateboard shops and friends.

Some of Flores’ work can be found at the Museum of Modern Art in New York, the streets of Los Angeles and in stores.

“One of the reasons we invited Flores to our campus is because he is a well rounded and international artist,” Childs said. “It was an opportunity for us to expose our students to an artist of this caliber.”

Later Flores created portraits, which he called “Icons.” The portraits are depictions of historic personalities like Mother Theresa, Neil Armstrong, Pablo Picasso and others.

Each of their faces had his mosaic style on them.

Flores also became known for the design and production and his limited edition vinyl toys, paintings and clothing with his stained glass approach.

“My favorite part is the way Flores has incorporated culture and the media,” said Emily Dai, APU junior and nursing major.

“The exhibit is an example of the artist’s prominent artwork,” Childs said. “It’s artwork that showcases his multifaceted abilities.”

The exhibit is open to the public and runs through Dec. 12.

Alejandra Aguilar can be reached at alejandra.aguilar@laverne.edu.