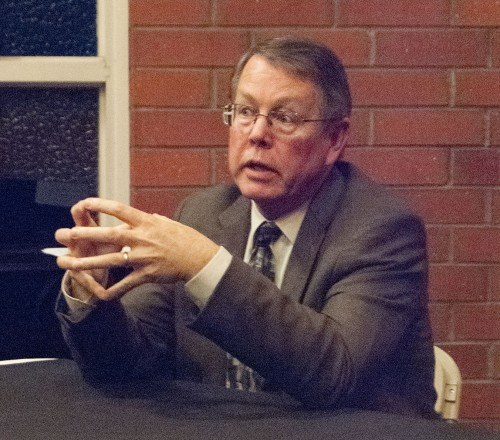 Jim Bueermann, president of the Police Foundation, a non-profit organization aimed at improving policing, discusses the mistakes the police department in Ferguson, Missouri, made after the death of Michael Brown. Buerrmann said the police department should have apologized to the community. The panel, which included Adrienna Wong, staff attorney of the American Civil Liberties Union, and Katrina Parker, activist and filmmaker, was the fourth part of the Ferguson discussion series Tuesday in the Chapel. / photo by Mariela Patron

Marisol Morales, director of civic and community engagement, and Isaac Carter, director of student affairs at the College of Law, hosted the discussion.

The panel was the fourth part of the College of Law’s five-part series, “Ferguson: A Call for Understanding and Action.”

Carter began the discussion by playing Parker’s video clips of protests that occurred in Ferguson. The people in the video were protesting the death of Vonderrit Myers Jr., who was shot by an off-duty police officer less than two months after Michael Brown.

“Ferguson is the epicenter for activism,” Parker said. “What’s going on in Ferguson can be used as inspiration and help other communities find the right fit for protesting.”

The video triggered a discussion about how each panelists would advise the people of Ferguson to respond to the civil unrest.

Bueermann, Parker and Wong agreed that the people of Ferguson should protest and let their voices be heard.

“Here’s what I think the people ought to do. They shouldn’t be quiet. They should protest if that’s how they want to express their opinion, but they need to make sure they get involved somehow,” Bueermann said.

The panel then moved on to discuss the low voter turn out that Ferguson had during the recent elections. Morales asked the panel if they believed the low number of voters meant that the people of Ferguson do not care.

The panelists said they believed that the people might have lost hope in the political and judicial systems. However, Wong said the people of Ferguson need to realize voting has a huge impact, especially at the local level.

“Sheriffs are locally elected. You vote for your sheriff and I think that has a huge impact on what goes on in law enforcement,” Wong said.

The final question asked panelists what actions they believe need to be taken in order to restore peace between the Ferguson Police Department and civilians. Bueermann said that he is not sure if a reconciliation process is possible at this point, but Wong and Parker believe it is.

“The police have to address the underlying issues of racism and patriarchy before they can gain back trust,” Parker said.

The panel ended with a question and answer session that expanded on the effectiveness of protesting and voting, and the police reformation process.

The fifth and final panel discussion, “Voting Power: How the Community Can Make its Voice Heard” will be held Feb. 17 at the College of Law.