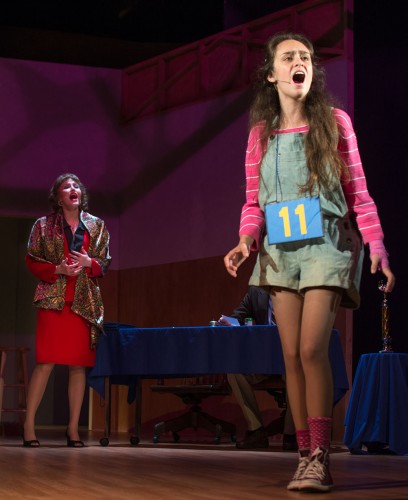 Jessie Bias, left, plays the imaginary mother of shy Olive (Katie Ochoa) in the duet “The I Love You Song.” “The 25th Annual Putnam County Spelling Bee,” a musical directed and choreographed by La Verne alumnus and professional director Zach Johnson, opened Nov. 13 in Dailey Theatre and continues through this weekend. The musical touched on the rigors of competition, with each participant of the bee coming to terms with winning and losing. / photo by Daniel Torres

Emotional breakdowns, laugh fests and an overlay of lisps are just some of the exhilarating aspects of the theater department’s musical “The 25th Annual Putnam County Spelling Bee.”

Featuring a cast of nine ULV students and alumni, “Spelling Bee” entertained the audience of about 80 in a frenzy of laughs Saturday night.

This audience-interactive musical sings the story of six unique junior high students who have each come a long way to enter the spelling bee and are competing to win a first place trophy.

They are all expert spellers, and their stories are portrayed through a series of flashback and musical numbers, which include “My Friend, the Dictionary,” “Magic Foot” and “I Speak Six Languages.”

Four audience members are invited to participate in the spelling bee, one of which was Felicia Beardsley, interim dean of the College of Arts and Sciences.

This element of surprise invites the audience to act as if they are actually watching a spelling bee, rather than watching a show, and incorporates the fundamental element of improvisation. In this case, no two shows are alike.

The show begins with a welcome from an exuberant Rona Lisa Peretti (Jessie Bias), a local real estate agent who won the third annual Putnam County Spelling Bee. She is accompanied by Assistant Principal Douglas Panch (Alex Freitas) and Mitch Mahoney (Ernie Reyes), a man on parole who has been assigned as the Bee’s comfort counselor.

These three adult characters, though seen as authority figures, are just as unstable as the awkward, prepubescent contestants. The words that each participant has to spell ranges from simple words such as “cow,” to tricky terms such as “kinnikinnick.”

As each character is introduced to the audience, we get a better sense of their past through solos.

William Barfée (Timothy May) is a young bowtie-wearing boy who spells with his magic foot, and develops a crush on Olive Ostrovsky (Katie Ochoa), an effervescent, quirky girl whose overalls are a size too large for her.

Ochoa stole the show with her solo in “The I Love You Song,” fantasizing about her neglectful parents, accompanied by Reyes and Bias. This song is much less chaotic and more heartfelt than some of the other outrageously active songs, like “Pandemonium,” where set pieces are rolled around the stage as the cast dances in a melee.

Each character has a strange, distinct personality of their own.

Leaf Coneybear (Wayne Keller) is a sweet, imaginative young boy who makes his own clothes and wears a cape out of a shower curtain.

He doesn’t believe he’s smart enough, as expressed in “I’m Not That Smart,” and needs to prove himself to his parents.

Since the cast is small, multiple characters are played by each cast member for short moments, used mainly for extra family members in flashbacks.

Logainne Schwartzandgrubenniere (Mona Lutfi) has a lisp and two dads who are extremely proud of her. Flashbacks of her life at home are portrayed by Reyes and Keller, who play her two dads.

Directed and choreographed by ULV alumnus Zach Johnson, clever allusions were made to current events, such as the outbreak of ebola disease and Kim Kardashian’s recent nude photoshoot. These instances are what keep this musical fresh and relatable.

One of the best aspects of the musical is the music itself, which was directed by ULV Instructor of Music Carol Stephenson. Not only are the cast members talented in terms of acting, but the harmonies they create are heavenly, especially in “Finale.”

All jokes aside, this tuneful musical manages to delve deep into the childhood psyche while simultaneously demonstrating uninhibited extensions of juvenile frustration.

The pressures each contestant faces are ones we all face in our lives, no matter what age. The pressure of being judged, being expected to win and wanting a shoulder to cry on are all universal feelings.

The agelessness of this theme is what makes it suitable for all ages and is reinforced by the idea of children being played by adults.

There is still a chance to see “The 25th Annual Putnam County Spelling Bee,” which is playing 7:30 p.m. Friday and Saturday, and 2 p.m. on Sunday in Dailey Theatre.