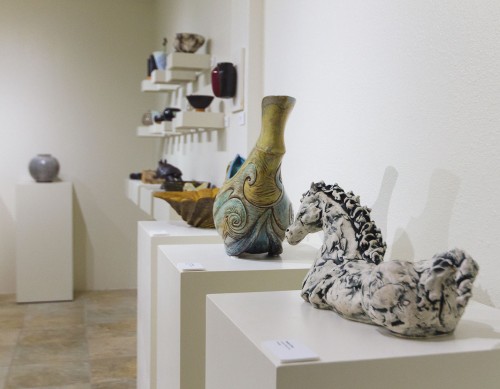 “The Gestural Horse,” a porcelain piece by Shelley Simon, is featured in the exhibition “Southern Migration.” This traveling exhibit, which is at its final stop at the America Museum of Ceramic Art in Pomona, runs through March 29. / photo by Michelle Leon

“Southern Migration,” an exhibit at the American Museum of Ceramic Art in Pomona, displays artists’ work from Ruby’s Clay Studio and Gallery.

Many unique pots, plates and bowls are showcased in the exhibit from artists including Larry Carbone, Katrina Price and Andrew DeWitt.

Ruby’s Clay Studio and Gallery, located in San Francisco, is a non-profit corporation that caters to hobbyist, professionals and beginners.

Since the equipment for working with ceramics is ex-pensive, the studio offers free equipment to members so they can afford to live and work in the Bay area.

“This studio gives artists an in-between space,” said Amrnia Johnston, manager at Ruby’s Clay Studio. “They can still work with ceramics, but they don’t have to show out money.”

Some artists have been a part of the studio for 40 years, while some were on the waiting list for over three years.

AMOCA shows ceramic artists’ work from all over the United States and other countries.
The museum has a special connection with local and state artists.

“We felt that by working with Ruby’s in the vault space, this helps engage the Northern California community,” said Beth Ann Gerstein, executive director for AMOCA.

“It is good for the art community to see what else is happening in the state.”

“Southern Migration” is a traveling exhibit that started out at Ruby’s Clay Studio and Gallery and is wrapping up at AMOCA.

This exhibit displays the talent and skill of various artists.

With each intricate detail, the pieces show the hard work, long hours and dedication of the artists.

The pieces exhibit vivid colors and abstract designs, which provoke viewers to stop and think about each piece.

“Green Cachepot with Bell Digits” by artist Andrew DeWitt is a green bowl that has five coral like arms extending from the bowl.

When looking at this piece, one might think of a coral reef and the ocean.

“This was a great opportunity for Ruby’s to be able to showcase their work down here and see what another clay studio is doing, and feature it in conjunction with our clay studio,” Hanlon said.

AMOCA is holding a contest in conjunction with the exhibit.

When a visitor goes to the exhibit, there is a box where he or she can vote for his or her favorite piece.

The artwork with the most votes will be granted the title of “peoples choice.”

The winner will be announced through the AMOCA’s social media on March 29.

“Southern Migration” is on display at AMOCA through March 29.

Admission is $7 for adults and $5 for students and seniors. Children under 12 are free.