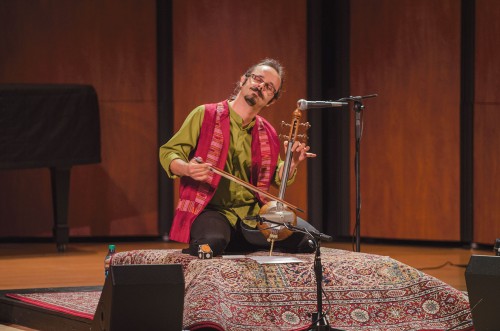 Mehdi Bagheri, composer and master of the kamanche, plays Saturday in Morgan Auditorium along with Peter Hanna and Robert Catalano. Bagheri hails from Iran and holds concerts around the world. The kamanche is an Iranian bowed string instrument that is played with a variable-tension bow. He started his musical career as a percussionist playing the tonbak. / photo by Alexandra Arkley

The Muqarnas trio brought together instruments from different parts of the world to create complementary melodies that captured various cultures Saturday in Morgan Auditorium.

The group featured Roberto Catalano on the mandocello, acoustic guitar, reed clarinets, reed flute and percussion, Mehdi Bagheri on the kamanche and Peter Hanna on the oud.

“They’re all also my students, which makes me a little old,” Catalano said. “Music just ties the three of us together, so there’s no age in that sense.”

The concert began with Catalano playing “Impression of the Italian South,” a medley which featured three songs that he heard and learned as a child growing up in Catania, Sicily.

He used instruments including bells, rocks and a reed flute, and impressed the crowd when he began singing in Sicilian simultaneously.

After the piece, Catalano introduced and invited Hanna onto the stage. They played “A Me Prijiera” or “My Prayer,” which featured gradual swells and alternating tempos.

They then began the third piece, “Improvisation on a Kurdish Theme,” a duet between Catalano and Bagheri, which symbolized the “marriage” of the kamanche and reed clarinets, called benas.

“We tried this evening to put these two instruments together because they actually go together rather well,” Catalano said.

The next piece was “Lamma Bada (Muwashshah),” a song based on an Arab-Andalusian love poem.

Hanna played the next piece, “Taqasim in F minor: Ya Musafer Wahdak” or “You, Who Travel Alone.” He skillfully used a pick to play the melody while using his thumb to pluck the top string, creating a steady deep bass line.

“It definitely took me back to my Arabic culture,” said Sondos Badran, sophomore biology major. “When (Hanna) was singing in Arabic, I recognized the music because my mom used to always sing it to me when I went to sleep.”

Catalano mentioned that the next song, “Crossroads Medley,” was a collection of three different songs that are dear to each one of the members. The transitions between the songs were seamless and each member took the lead of their chosen song.

Mehdi and Hanna then performed “The Faraway,” a song composed by Mehdi.

Before playing the next song, “Fronteras” or “Borders,” Catalano provided some information about the song, which was written by a Palestinian refugee who wishes for a world without borders.

The next piece, “Sant’Ancilu, Non Durmiri!” or “St. Angelo, Do Not Sleep!” was based on old prayers and latmagic formulas that Sicilian peasants used to prevent crops from being damaged or destroyed. Catalano used rubbed plastic filled with air near the microphone to create the sound of rain. He then rattled his fingers against a large tambourine to imitate thunder. The instrumentals became louder and faster until it slowly died out, representing the passing of a storm.

The group then played “Peter’s Song,” an original composition by Hanna for Muqarnas.

The trio closed the concert with “Acuqa e Sali/Trance A-Minasi” or “Water and Salt/Trance-A-Minasi,” a song written by Catalano and two other friends.

He was inspired by an ancient formula that involved throwing water and salt out a door to prevent witches and evil from entering a house.

Originally a two-part song, Catalano said the second part was too disturbing to play.

“I just liked the story that it told – how the three instruments just played together,” Shannon Irwin, junior kinesiology major, said.

“They weren’t reading music, they were just playing off each other and feeling it.”