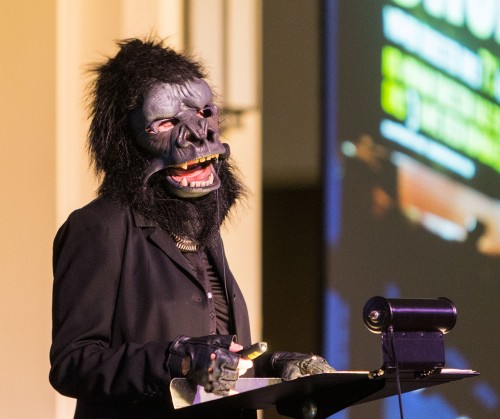 The Guerrilla Girls characters are identified by the names of deceased famous artists. Their objective is to promote feminism by shining a light on what they believe to be inadequate representation of women in the creative world. The “Frida Kahlo” character expresses the importance of including more female artists in museum exhibitions at the group’s Feb. 5 performance. She also wants to change the way women are viewed in museums and different aspects of the art world. / photo by Michelle Leon

More than 400 men and women came for the Guerrilla Girls performance in Edmunds Ballroom at Pomona College Feb. 5, as the Girls threw bananas into the audience to kick off the show.

Then the two masked Guerrilla Girls read quotes from different times in history.

Mockery and comedy are the basis for the group’s performance art. They read sexist quotes from Martin Luther, Pythagoras and others – in sarcastic tones that amused the audience.

The feminist group members keep their anonymity by taking the names of deceased female artists ­– and wearing gorilla masks for every appearance.

Occasionally the Girls’ participation in the group is even unknown to their mothers.

Throughout Thursday’s performance, the Girls continued to get their point across in a comedic way and informed the audience of all their work since they began in 1985.

Their witty and mocking tone is apparent in all of the work that they do, keeping the audience inspired as well as entertained.

“Being unique (is) not being afraid of saying what you want and going against the grain,” Ben Feldman, student curator of the Guerrilla Girls exhibit, said.

An exhibit of the Guerrilla Girls’ artwork is also featured in the Pomona College Museum of Art, “Guerrilla Girls: Art in Action.” The exhibit brings a new perspective to the museum and informs students of issues in the world today.

The museum exhibit has more than 20 of their best-known pieces.

Many pieces contain statistics meant to shock their particular audience and back up their argument.

The Girls personally research the museums and calculate the statistics on their own.

“Do women have to be naked to get into U.S. museums? (Women make up) less than 3 percent of the artists in the Met. Museum are women, but 83 percent of the nudes are female,” is written in bold black lettering on a yellow background, successfully catching the audience’s attention.

The exhibit exemplifies the transformation of the Guerrilla Girls.

Their initial focus on the marginalization of women in art has led to political posters and billboards about discrimination in other parts of life as well.

With 55 members in the Guerrilla Girls, their legacy is continuing to grow and museums such as the Pomona College Museum of Art are helping push forward the feminist movement.

“I think it is good to hear more people doing that kind of thing,” Gervais Marsh, gender and women’s studies major at Pomona College, said.

The movement now has supporters all over the world. The Girls have traveled extensively to many other countries spreading their feminist activism. Their art has filled exhibits in places such as Madrid, Ireland, and Istanbul. Their website states they are the “conscious of the art world.”

The group has been an inspiration to many and while there is a wide spread support for equal rights of women, feminism seems to be a word people shy away from.

“You shouldn’t be afraid to use the word,” Feldman said. The Guerrilla Girls: Art in Action exhibit will remain in the Pomona College Museum of Art for public viewing through May 17.