By Hal Hargrave, Helen Arase on February 20, 2015 in Baseball, Sports 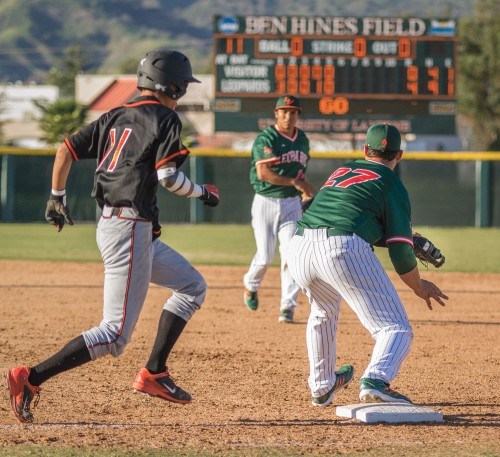 Caltech junior center fielder Daniel Chou is thrown out at first base by La Verne junior second baseman Aaron Orona to junior first baseman Ben White in the top of the sixth inning Friday at Ben Hines Field at Campus West. The Leopards harassed the Beavers from the first inning, winning 12-1 at the bottom of the eighth, after the mercy rule was enforced. / photo by Helen Arase

The baseball team brought its talents back to Ben Hines Field at Campus West for its first game of the Southern California Intercollegiate Athletic Conference and home opener of the season with a 12-1 win Friday over the Caltech Beavers.

With a win on Friday and two wins Saturday, 12-0, 18-1, the Leopards swept the Beavers to start off the season on a good note.

The Leopards are 4-3 overall on the season and 3-0 in SCIAC conference.

“We worked really hard this week on correcting and fine-tuning some of the little things and executing on parts of the game that we did not out in Arizona,” junior pitcher Alex Bernstein said.

“It felt good to come home and put that to action in games and get some W’s that were a direct correlation of our hard work in practice this week,” he said.

In the bottom half of the first inning in Friday’s game, junior shortstop Woody Reyes doubled down the left-field line and scored after the third batter of the inning junior outfielder Matt Caselli reached first base on an error that brought Reyes home to make it 1-0.

The ball skid past sophomore right fielder Harrison Jacobs to the outfield fence, as Caselli came around from first to score.

“Since I was younger, I haven’t been great at pulling the ball because my swing was just such an inside-out swing that I hit the ball the other way,” White said.

“It hasn’t been until college that I been able to develop hitting the ball all around the field in any count and pitch thrown to me. My mindset has helped being an opposite field hitter of not always wanting to pull the ball and trying to hit one out of the park, my gap to gap hitting has been because of my ability to hit the other way,” he said.

White finished the game three-for-five and an RBI.

With the score, 3-0, at the end of the first inning, Bernstein came back out to the mound confident with the Leopards in the lead. After giving up a walk to the first batter, Bernstein managed to get the next three batters out.

Senior outfielder Tyler Watkins recorded a single and a stolen base in the bottom of the second inning.

Although the Leopards were hot on base, they were unable to score.

“The lineup has done a good job as a whole this, season putting us in positions to drive in runs, but more than anything else we took advantage of those opportunities and executed,” Watkins said.

“We have to continue to build on that approach going into this next weekend and later into the season,” he said.

Watkins finished two-for-four with two runs scored and an RBI.

He also had a walk drawn out of the leadoff spot. The Leopards continued to dominate the game and scored once again in the bottom of the fourth.

Watkins sacrificed senior catcher Zach Quinones over to third and Reyes hit a sacrifice fly to the outfield to drive Quinones home.

The team was able to pick up three more runs in the sixth and seventh inning from RBI singles of Caselli and Watkins.

This made it a 7-0 lead for La Verne heading into the eighth inning.

The Beavers looked hopeful as they were able to pick up their lone run of the game in the top of the eighth inning.

La Verne answered back in the bottom of the eighth. Sophomore outfielder Ashton Edior doubled down the line to score Thomas and senior designated hitter Mark Jebbia.

Then sophomore infielder Andrew Douglas had a sacrifice fly to center field, as junior Daniel Chou was unable to get it in time.

Douglas was then able to score junior center fielder Nolan Henley from third, extending the lead, 12-1.

To envoke the run-rule, or better known as the mercy rule, La Verne needed one more run.

Freshman catcher Mark Abbate did just that as he singled through the right side to score both Edior and Watkins for a five-run eighth inning, in which the mercy rule was then applied and ended the game with a win for the Leopards.

“The team feels good coming off the weekend but we know that there’s always things to improve on,” Bernstein said.

“We made some mistakes this weekend the other teams may capitalize on, but we got away with it. We need to focus on those aspects of the game this week in practice, and fine tune those things and just take it one day at a time and not look at it as a whole weekend, but just one game on Friday to start,” he said.

The Leopards next game is at 2:30 p.m. Friday at Arce Field against the Claremont-Mudd- Scripps Stags.