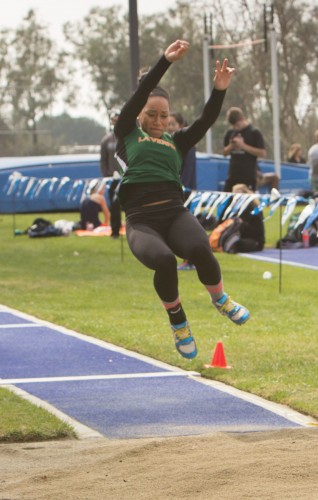 Junior Jessica Reeves jumps for 4.16m in the long jump event at the Pomona-Pitzer All-Comers Saturday at Strehle Track. She came in 13th place. / photo by Celene Vargas

The meet was for individuals at any divisional level other than Division I.

There were more than 15 schools represented in the Southern California area.

Both professional and unattached athletes came out to compete against each other.

“These meets are good for us to compete at because we are all able to see how we stack up against higher-level collegiate athletes,” senior distance runner Jayden Earlywine said.

“A Division III athlete could compete against a professional if their marks are in the same range, so it makes the competition fun for us,” he said.

The relay team beat out Chapman, Southwestern, Pomona-Pitzer and Claremont-Mudd-Scripps from the SCIAC league and NAIA school Concordia. Francis also came in third in his heat with a time of 11.21 seconds in the 100-meter event.

“The meet for me was kind of a ‘a-ha’ moment because I have never been this healthy going into track season so I felt super confident with my body and my legs heading in to the event,” Hayes said. “It felt good going in with the strong mentality in the mind set to kick some butt.”

He later finished in fifth place overall racing against 59 other runners in the 3,000-meter distance event.

“Talking to coach after the race he definitely thought that I reached expectation, but as a runner and a competitor I always feel as if there is room for improvement and points during the race where I could have made different moves to move to the front,” Hayes said.

His fifth-place finish was third among Division III runners in the event, who were also from the Southern California Intercollegiate Athletic Conference.

Senior distance runner Andrea Ramirez finished 11th in the 3,000 meter run at a time of 10:18.49. Freshman runner Aminat Olowora of Southwestern came in first with a time of 9:56.59.

In the field events, junior thrower Mele Halalilo dominated the javelin and shotput finishing in the top three in both.

“I have had cousins that have gone to La Verne so my goal is to continue to PR and try and beat their records that are up on the walls at La Verne,” Halalilo said.

Halalilo finished third in the javelin event with a throw of 33.57 meters.

She also finished second in the shot put with a toss of 12.29 meters.

Halalilo also finished in eighth place in the discus throw with a throw of 34.79 meters.

“I was happy with how I did in my throws, but I know that I can continue to get better,” Halalilo said.

“I can progress by continuing to polish up and get better at my technique so that it is flawless and I can maximize my throws,” she said.

Gura and Carrasco also finished in second and third in the hammer throw with throws distancing 46.88 meters and 44.47 meters, respectively.

Sophomore pole vaulter Taylor Schulze finished 11th in the pole vault out of 19 vaulters, at a height of 2.88 meters.

Sophomore unattached pole vaulter Ariel Cheng came in first place with a vault at a height of 3.63 meters.

“That’s always a factor is to have individual best at meets like this. Coach Pat is always happy at the end of the day if at meets we are able to put our best foot forward and compete,” Earlywine said.

“As a whole team when it comes down to conference and SCIAC we are always looking to take the title, and ever since my freshman year we have continued to get better so this could be our year.”

The team will compete next at the Rossi Relays Saturday, hosted by Claremont-Mudd-Scripps at Burns Track Complex.