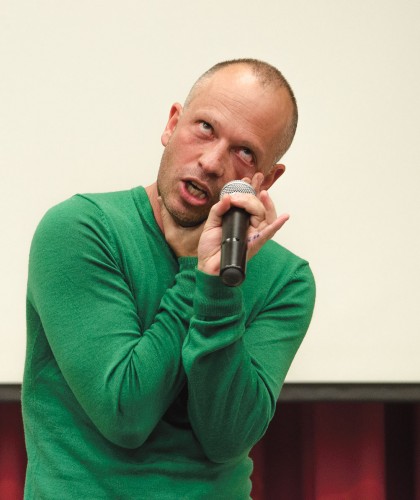 Packard kicked off the show by poking fun at the other star of the evening–a chocolate fountain with strawberries and other sweets.

He joked that private schools serve “Russian hooker strawberries,” which set the stage for comedy to be included in the rest of his performance.

“When something is funny, it flies right past the ego and straight to the soul,” Packard said.

Throughout the show, Packard emphasized everyday issues that both men and women have about love while adding a comedic tone, which made him relatable to students.

He targeted experiences he knew many students might have been through and addressed them.
To allow the audience to release anger from a confusing situation or a bad break up, he counted down for the audience to yell, “What the hell!”

Vulgar content and frequent explicit language was one of Packard’s main tools in attracting the young adult audience.

Stories from Packard’s personal life were added to his performance. He told the audience about his unsuccessful earlier love life, including his acne-filled high school days.

In addition to his personal experience, Packard’s training as a love coach enables him to provide students across the United States with valuable information on how to be more receptive of love and more understanding of others.

Many students found advice they would consider among Packard’s jokes and criticisms.

“I am not going to try so hard to impress others,” Monterroza said.

Men and women were separated to encourage audience participation.

Packard highlighted everyday issues that both genders have when it comes to love.

He focused on the women for a moment when he sensed that some of the audience members were getting offended by what he was saying.

“Women can actually telecommunicate with each other,” Packard said.

The audience was a large part of the show as it was frequently asked to participate.

Upon entering the show, students filled out cards that asked questions about what insecurities they had and what frustrates them about the opposite gender.

The answers were read aloud and many were related to physical attributes. Having sweaty hands is freshman biology major Jenna Damon’s insecurity.

Packard helped the audience realize they should not be afraid of rejection because of appearances. He emphasized that personality and confidence matter too.

“I realized people don’t actually have the power to hurt you- you let them hurt you,” Cynthia Ramirez, sophomore economics major, said.

The show inspired students to be confident and find ways to add more love to their lives.

“When you love you, you are invincible,” Packard said.