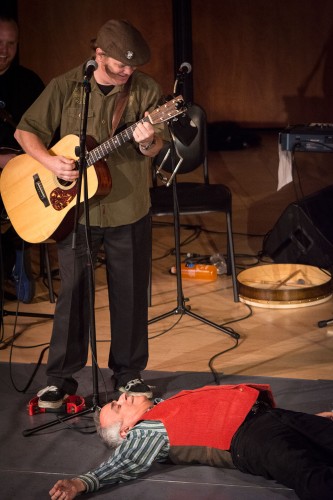 Danny Oberbeck stands over Hai Muradian while performing “Finnegan’s Wake” during the Spirit of Ireland concert Sunday. Oberbeck and Muradian are musicians in the Michael Ryan and Friends band, performing both original and classic Irish-inspired songs. / photo by Daniel Torres

Michael Ryan and Friends took the audience to Ireland through a concert performing Irish favorites and original compositions at 6 p.m. Sunday in Morgan Auditorium.

“Spirit of Ireland” had a large crowd with more than 100 people, filling a majority of seats in the auditorium.

The show started with a brief introduction from Felicia Beardsley, the interim dean of the College of Arts and Sciences, who welcomed the audience and encouraged people to support Sundays at the Morgan.

As the lights dimmed, the musicians positioned themselves on stage and started with their first piece written by Ryan titled, “Irish Farewell.” The tone of the music was soothing and calm, followed by more upbeat pieces that made the audience join in and clap along.

“All the people that came were great,” said Ryan, a music department associate. “I really felt connected to the audience.”

The audience recognized many of the well-known songs, and were encouraged to sing along.

“I thought it was delightful,” said Ruqayya Yasmine Khan, chair of Islamic studies and associate professor of religion at Claremont Graduate University. “They did a marvelous job with the range and the confidence with which they performed.”

Guitarist and vocalist Danny Oberbeck kept reminding the crowd that it was 17 days before St. Patrick’s Day. He said all Irish songs were about “love and regret… and drinking.”

Irish dancers with glittery green skirts came out from time to time to perform, tapping their heavy shoes in conjunction with the music to create rhythms.

The audience enjoyed the competition between the three Irish dancers and stand up bass player Julian Johnson.

The Irish dancers danced one by one while Johnson studied the dancer’s moves to duplicate their shoe’s rhythmic pattern on his instrument.

The audience was impressed and decided Johnson should be declared the winner of the competition.

“This was my third time seeing them and I thought (they) were fabulous,” Chaparral Elementary School teacher Annette Reed said.

Reed said her favorite part was when they played the piece “Finnegans Wake.” Flute player Hai Muradian acted out the lyrics while Oberbeck sang the song.

Muradian played a tipsy drunken man, causing the audience to erupt in laughter at his whimsical character. He climbed the tiny ladder, fell and played dead as part of the show. Ryan then covered Muradian with a white sheet.

Oberbeck joked and asked the audience if the color of the sheet was really white, rather than blue and black.

This was a reference to the dress that went viral on the internet, causing a debate as to whether the dress is actually blue and black or white and gold.

Muradian had a solo piece and whistled some parts of the song. At one point, he drank water and there was still whistling in the background, which amused the audience.

“I can also chew gum and walk,” Muradian said jokingly to the audience. The band ended with a happy song “Marie’s Wedding,” and received a standing ovation by the audience.

At the end of the show, Ryan signed copies of his CDs.