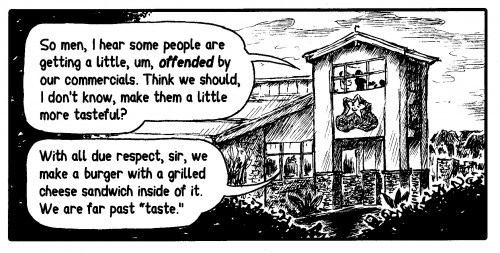 Model Charlotte McKinney walks through an outdoor supermarket in the beginning of Carl’s Jr.’s latest commercial, however there is something missing—her shirt.

The overtly sexual commercial follows McKinney through the market as men’s heads turn, as it appears that she does not have on any clothes.

She is going “all-natural” just like the new “All-Natural Burger.” Different fruits strategically cover up her body parts as the commercial goes on, including an apple in place of her butt and melons in place of her breasts.

It all culminates in the end when the model appears in a racy bikini top as she takes the classic wide mouthed bite of the burger her body is being used to sell.

Just a commercial for a burger? More like a media epidemic. Carl’s Jr. has a long record of selling their burgers, sandwiches and salads by using women as a prop to lick, bite and touch the food throughout the duration of the commercial.

A long list of famous women including Kim Kardashian, Kate Upton, Heidi Klum, Audrina Patridge and many more have been objectified in past commercials.

By turning women’s bodies into objects in their commercials Carl’s Jr. is perpetuating the idea that women are passive beings that are here for the pleasure of men.

These images contribute to a culture that already dehumanizes women in the media, which leads to sexual violence.

In August 2014, “Beauty Redefined,” an organization dedicated to redefining the image of women in the media started a campaign against Carl’s Jr., asking people to “#cutthecarls because women are #morethanmeat.” The campaign gained national attention and was featured on national news sites, however since then, more commercials (like the one featuring McKinney’s “all-natural” body, which aired during the Super Bowl) have been released.

Carl’s Jr. must be stopped. The only way to get the point across is to boycott eating Carl’s fast food. Until there are some healthier images in its commercials, no one should go to Carl’s Jr.

One Response to Carl’s Jr.’s sexist ads are tiresome