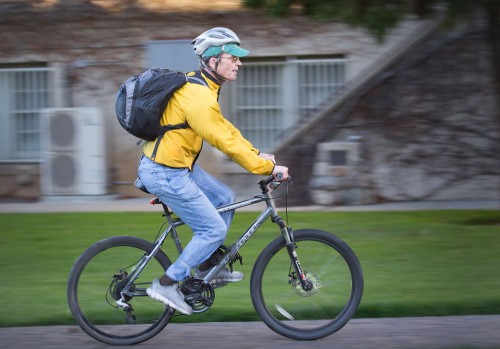 Al Clark, professor of humanities, rides his bike to work daily. Clark said he believes that the proposed state law to require all bike riders to wear helmets is a good idea because of the dangers for cyclists sharing the road with cars. Clark said all cyclists should be required to wear a helmet because both drivers and cyclists “drive crazily” and many fail to signal. / photo by Jerri White

Many teens look forward to turning 18 and no longer being required to wear a helmet while riding their bikes; however, a proposed bill will require all bikers regardless of age to wear helmets.

“Helmets protect the brain by absorbing the impact after a collision – they protect and save lives,” said Andrew McKindley, school resource officer for the La Verne police department.

Approximately 15 to 20 percent of all accidents in La Verne involve a bike, McKindley said.

Current state law requires those under 18 to wear a helmet while bike riding.

The proposed law would require everyone, including those over 18 to wear helmets while bike riding.

University of  La Verne Professor of Humanities Al Clark, who rides his bike every day and always wears a helmet, is in favor of the bill.

“I have known lots of people that have been in accidents that have not been their fault,” he said. “Those that wear helmets have survived with little injury.”

Some believe, however, that the bill is too demanding and in some cases unnecessary.

“In an area with low traffic like your own community, it is not needed,” said John Trendler, committee member for the Pomona Valley Bike Coalition.

Students at the University of La Verne tend to agree with Trendler: Unless the rider is performing tricks or riding very far, helmets should be optional.

“I don’t need to go out of my way to protect myself from something I have been safe doing so far.”

Foxe lives in La Verne and occasionally rides his bike or skateboard to school.

He said that he does not wear a helmet and never has, even as a child.

“The bill completely eliminates the convenience factor of being able to grab my board and go,” he said.

Another component of the bill is that if riders are found not wearing a helmet they will face a $25 penalty.

“Helmets cost money that not everyone can afford,” Trendler said.

The bill indicates that 72.5 percent of the fines collected will go toward increasing safety education and assisting low-income families in obtaining helmets.

Cost is only one issue that Trendler has with helmets.

Being a part of the Pomona Valley Bike Coalition, he advocates for safer streets and attracting more bicyclists. The California Bike Coalition is also against the bill.

Like the Pomona Valley Bike Coalition, Liu’s goal for the bill is to increase safety for bicycle riders, not to decrease the number of people who ride bikes.

“I will ride a bike considerably less,” Foxe, said.

Freshman psychology major Ryan Krong, however, said is in favor of the bill.

He fell off of his bike on campus Thursday, resulting in cuts, bruises and four staples in his head. Krong would decide to wear a helmet if he could go back to before his accident.

“The nuisance of wearing it is much more enjoyable than walking around with scars on your face and staples in your head,” Krong said.

Another amendment to the current bike laws will be the requirement of high visibility safety apparel such as reflective shirts or jackets.

“When I ride at night I can see how poorly people can be seen, and reflective clothing would make a big difference,” Clark said.

McKindley agrees with Clark that reflective clothing could make a big difference.

“It could be just what they need to keep the drivers from swerving into the bike lane or cutting them off,” he said.