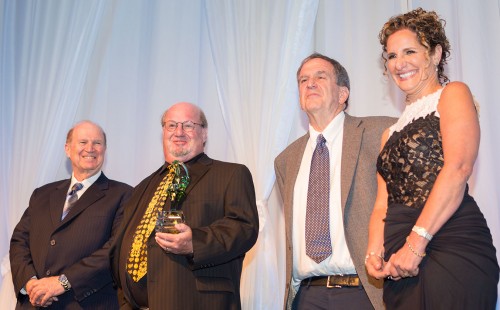 Lewis brothers Roger, Robert and Randall listen to Richard Lewis’ (not pictured) honoree remarks praising Devorah Lieberman’s ability to persuade all four Lewis brothers to appear on the stage while wearing neckties. The Scholarship Gala was hosted at the Sheraton Conference Center Saturday, honoring the Lewis brothers of the Lewis Group of Companies for their services to the school and the surrounding community, and to raise scholarship funds for students at the University. / photo by Helen Arase

The University of La Verne raised $593,000 to put toward student scholarships at the annual Scholarship Gala Saturday at the Sheraton Fairplex Conference Center.

Donors, trustees, faculty members and students came together to honor Richard, Robert, Roger and Randall Lewis of the Lewis Group of Companies at the gala.

The Lewis family has assisted with the construction of the Campus Center and has helped fund scholarships for colleges and universities across Southern California and Nevada.

The Lewis family has been dedicated to supporting community growth and funding scholarships for students who are in need for many years.

They said that they support higher education because it is the right thing to do.

“Our dad was a product of public schools, whether it was the high school in Los Angeles, L.A. City College and then UCLA,” Roger Lewis said. “He felt that the state of California (and) the county of Los Angeles had given him the opportunity to get his education and be somebody and that other people should have that same opportunity.”

For some students, scholarships are the only way they are able to obtain an education from the University.

Recent La Verne alumna Alina Rozwadowska and senior journalism major Julian Mininsohn were given the opportunity to speak at the Gala about how scholarships had affected their college experience.

“While the dream to be a sports journalist has no price, the process of reaching that dream comes with a costly price tag,” Mininsohn said in his speech.

“In order to become a Leopard I needed more than just to be spotted, I needed scholarships and aid.”

Mininsohn is the inaugural recipient of the Rob K. Fukuzaki Heads Up Youth Foundation Scholarship.

Fukuzaki studied broadcasting at the University of La Verne and is the current sports anchor for ABC7. He is the founder of the Heads Up Youth Foundation, which is a non-profit organization that aids disadvantaged and at-risk youth in Southern California.

Rozwadowska, who graduated this past January with degrees in international business and Spanish, spoke about how the European debt crisis took a toll on her ability to continue paying tuition.

She explained that she would have not been able to graduate if she had not received the Dean’s Scholarship from Abe Helou, dean of the College of Business and Public Management during her freshman year.

“From the bottom of my heart I would like to thank the donors for the amazing influence you had on me, other alumni and future graduates,” Rozwadowska said in her speech.

“What you do is really powerful — you give students hope for better tomorrows, you don’t paint in pretty dreams and talk in empty slogans, you arm us with practical knowledge to change the status quo. One of the most important life goals is to give back and thanks to the education I have received I will be able to provide opportunities to those in need,” she said.

Students were not the only ones to emphasize the importance of scholarships.

“La Verne is a private institution,” Fukuzaki said. “It’s not cheap, and La Verne did so much for me when I was there, and so I always want to do what I can to give back to the school.”

“Whatever scholarship any kid gets or has the chance to use towards their education I think it’s very important to provide that and I was very honored and humbled that I’m able to do it,” he said.

The money that was raised at the Scholarship Gala will go to the University’s scholarship fund and will be awarded to students in the future.

“Our students are always going to need support from our donors and our alumni and (the Scholarship Gala is) a nice way to bring everyone together and give them that opportunity to give back,” La Verne Mayor Pro Tem and Assistant Professor of Education Donna Redman said.

“I felt like every person who attended tonight was inspired by our students’ stories and the Lewis Family Corporation,” University President Devorah Lieberman said.

“That was the purpose of the evening and I feel like the inspiration bar was set high and our students and our honorees met it,” she said. 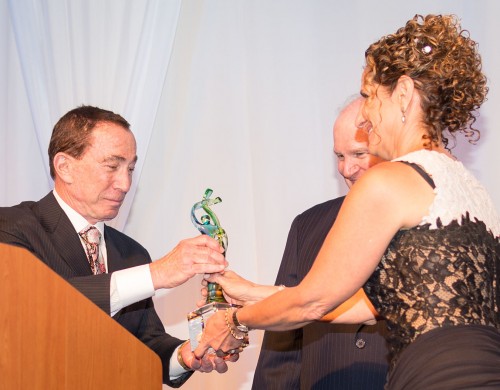 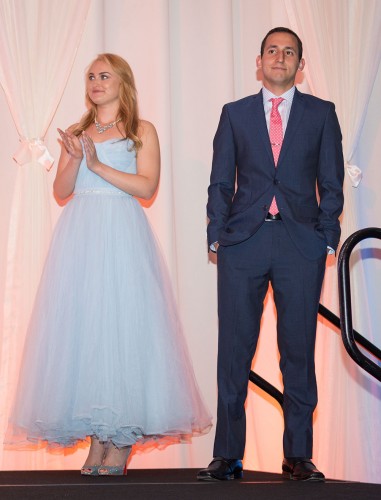 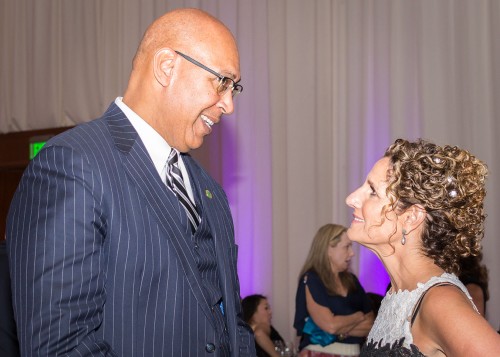 State Assemblyman Chris Holden (D-Pasadena) is welcomed to the University by Devorah Lieberman before dinner. / photo by Helen Arase 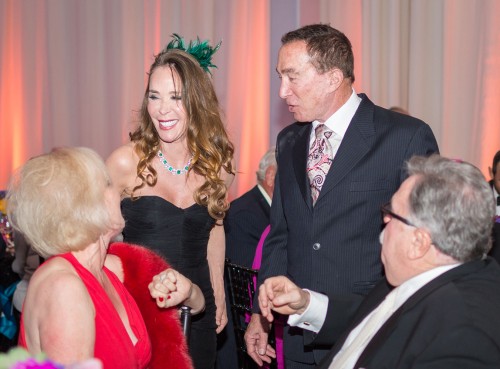 Rebecca and Richard Lewis greet friends of 35 years Diane McIntyre and William McIntyre at the University of La Verne’s Scholarship Gala ’15. William McIntyre said, “We’ve worked together and it’s always been a handshake. With the Lewis family, a handshake is good enough. They’re great people.” The Scholarship Gala ’15 was held Saturday in honor of the Lewis brothers and to help raise money for the University of La Verne scholarship fund. / photo by Helen Arase 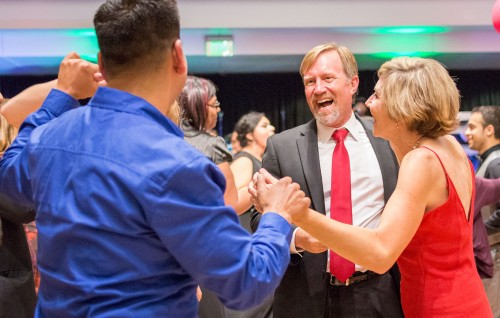 Faculty of Modern Languages Jose Perez-Gonzalez cuts into Provost Jonathan Reed and wife Annette Reed’s dance at the University of La Verne’s Scholarship Gala. Many administrators, faculty and staff were seen on the dance floor together. The Scholarship Gala ’15 was held at the Sheraton Fairplex Conference Center Saturday. / photo by Helen Arase 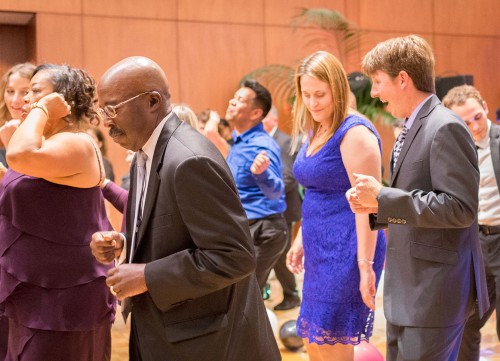