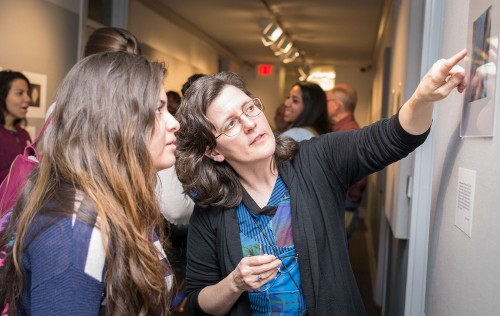 Professor of Biology Christine Broussard explains to junior biology major Diana Gonzalez how “Limb Bud and Somites, 2003” is relevant to her classes Feb. 26 in the Carlson Gallery. The teal and purplish colors in Broussard’s image come from dyes that make it easier on the untrained eye to see the formation of a vertebrate limb beginning with a paddle. Broussard is one of nine University of La Verne biology department faculty members whose photographs are featured in “Essence in Pictures: Photography as a Collective Microtome.” / photo by Helen Arase

Many University of La Verne biology department faculty members attended the “Essence of Pictures: Photography as a Collective Microtome” photo exhibit reception as photographers presented their personal works on nature in the Carlson Gallery Feb. 26.

“There’s more than meets the eye,” said Denise Mejia, freshman photography major. “Once you get a closer look and talk to the photographers, you get the story behind the pictures.”

Mejia enjoys shooting landscape photographs and after seeing the photo exhibit, she is now more interested in nature and animals.

“It’s neat to see all the different levels of animals,” said Kat Weaver, assistant professor of biology. “They’re all different but they’re the same. I like seeing nature in action.”

Weaver has photographed for over nine years and enjoys taking photos of nature and people. She often takes her students to see nature in places such as the University’s Clark Fork Field Research Station in Montana. She also visited the Galapagos Islands and the Amazon rainforest with students for the Honors Program’s freshman January interterm course.

“I like capturing animals in unique positions, trying to reflect what I see,” Weaver said.

A very memorable moment Weaver experienced in the Amazon is captured in her photograph, “Unlikely places.”

The bright red poison-arrow frog in the photo has vivid colors and its large eye often distracts the viewer from seeing the most important part of the photo – a very small snail on one of the frog’s legs.

“If you look carefully, you can see a snail,” Weaver said. “This frog is super poisonous and the fact that the snail is living on it shows that animals and snails can live anywhere.”

After teaching for 40 years at the University and retiring in 2006, he frequently travels and takes many photos on each trip. He still teaches part time and he will be visiting Alaska soon to take more photographs.

In the photograph, the sheep is turned to the side, with only one eye showing and looking straight at the viewer. Because there were many people operating gold mines around the area, the sheep were not frightened by the sight of people.

“I followed a couple of herds from the local mountain,” Good said. “I have my students do projects on them. I have a special interest in them and lots of photos of them.”

His students’ projects consisted of observing the eating habits and other behaviors of the bighorn sheep.

“The population goes up and down,” Good said. “Several years ago, after a major fire, there was heavy vegetation and herbs, so (the sheep) were really healthy.”

In 1989, the bighorn sheep population in the local areas increased rapidly and were trapped and moved to national parks with less population, Good said. Some photographs on display represented anecdotes of University students.

“Arachnophilia,” by Biology Instructor Pablo Weaver, is a macro photograph of a brown spider on a light green leaf. The photograph embodied an anecdote of a student afraid of spiders while on a trip to Montana to observe wildlife and animals.

Weaver and Professor of Biology Emeritus Robert Neher helped the student overcome her fear and she held a spider in her hand at the end of the trip.

Neher’s photographs portrayed animals the Humane Society brought to him because there was no organization to take care of unwanted animals. The animals were often mistreated, Neher said.

Neher kept many of these animals in his backyard, including 20 to 30 tortoises at one point, a coyote that acted like a dog, a raccoon that was previously abused and many more other animals.These animals often played with Neher’s children.

Other photographs depicted the interior of animals, such as Professor of Biology Christine Broussard’s “Heart Formation, 2003,” which shows a chick embryo and its tube of tissue for the heart.

“I think it’s really cool seeing photos that are so close to nature,” said Breanna David, junior liberal studies major. “I like that there’s details on the animals… and the focus is on the animals.”

“I just appreciate that someone was able to take pictures of (nature),” she said.

“Essence of Pictures: Photography as a Collective Microtome” is open to the public in the Carlson Gallery through April 10.