By Chris McMahan, Daniel Torres on March 27, 2015 in Sports, Tennis 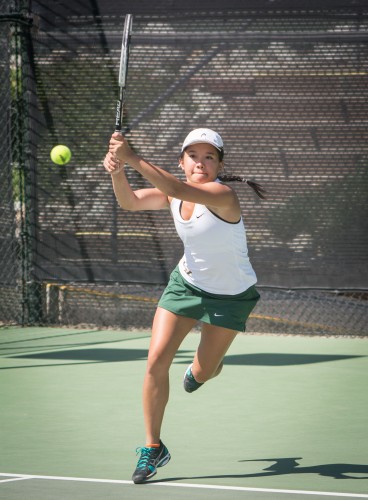 La Verne freshman Janae Chinn returns a serve in a doubles match against Tufts University March 19 at the Claremont Club. Chinn and teammate junior Andrea Madrigal were one point from tying midway through the match, but were unable to win as Tufts pulled ahead for a final score, 8-5. / photo by Daniel Torres

The women’s tennis team lost, 6-3, to Tufts University of Massachusetts March 19 at the Claremont Club. The Jumbos are tied with the Leopards at No. 17 in the Intercollegiate Tennis Association Pool.

In three doubles matches, La Verne managed only one win.

“(Tufts is) around the same level as us, so we expected a fight for every match and we came out here and fought,” Matsuda said.

“I know these matches, while they are tough, they’re going to use them for later,” Duron said.

In the singles matches, Tufts again got the upper hand by taking four of the six matches over La Verne.

“I think we all played well, it just did go our way today,” Matsuda said. Matsuda won in two sets with scores of 6-3 and 6-2, over Meltzer.

She defeated Hayashi, 6-2, in both sets.

The hardest fought match of the evening, despite it being a loss for La Verne, was between Calabro and Madrigal.

Calabro won in two close sets with scores of 7-5 and 6-4. Freshman Janae Chinn also fought hard in her match against Miller.

Chinn was unable to keep up with Miller, resulting in a two set loss of 6-4 and 6-2. Louks defeated sophomore Lauren Torres in two sets by scores of 6-2 and 6-0.

In the final singles matches, Tufts continued to dominate over the Leopards, Baum defeated Trujillo in two sets with scores of 6-3 and 6-1.

“For singles, we did a much better job than yesterday in terms of grinding out there and staying patient. I’m really proud of them,” Duron said.

The team was playing its third match in four days and Duron said that helped contribute to the loss.

“What we can work on is moving a little bit better at the net and closing,” Duron said.

The Leopards pounced back with a 9-0 win Tuesday against Willamette, snapping their three-game losing streak.

The team came back with vengeance and did not drop a single match, dominating the Bearcats.

The Leopards went back in action, as they faced UC Santa Cruz Wednesday.

The team took the victory over the Banana Slugs, 8-1.

La Verne took a 3-0 lead in the doubles match and from there, it was La Verne’s game. Chinn defeated freshman Islay Fossett, 6-1 and 6-2, to clinch the singles match for the Leopards.

Matsuda and Etchergaray were on fire, to kick off the doubles matches for La Verne.

The duo picked up a quick win, 8-1, over senior Courtney Lymburner and junior Katy Collins.

The only loss of the day came from Etchegaray, who took the first set, 7-6, but withdrew the second set.

The team is now 8-3 overall and 2-0 in Southern California Intercollegiate Athletic Conference play.

“Honestly I think if we all play our best and leave it out on the court, we can beat any team in our conference,” Etchergaray said.

The team will face No. 5 Claremont-Mudd-Scripps, a big conference opponent, 2 p.m Friday at the Claremont Club.