By Helen Arase, Jolene Nacapuy on April 3, 2015 in Baseball, Sports 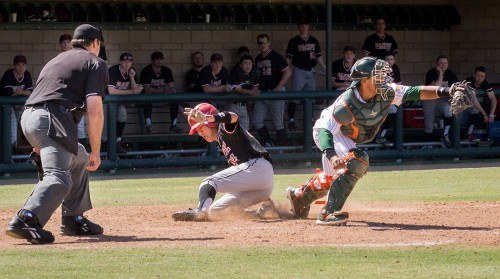 Pacific University freshman third baseman Cole Kanazawa scores in the top of the seventh inning during game four of the series Sunday at Ben Hines Field, as La Verne sophomore catcher Nikko Williams catches the ball too late. The Boxers defeated the Leopards with a final score of, 11-6. / photo by Helen Arase

As the Pacific University Boxers found their offensive rhythm, the La Verne baseball team fell short and faced a tough 11-6 loss Sunday in game four of their series.

With pitcher switch outs and a back-and-forth ball game, both teams battled it out to take the lead.

Though both teams fought hard throughout the game, the Boxers offense was too much for the Leopards, as they sealed the win.

“It’s not a great time not to play well during the season, but being that it’s not a conference series, it doesn’t hurt us as much in the conference standings,” head coach Scott Winterburn said.

“The main concern is in how we played, so we played really bad and we’re gonna have to play a lot better in the coming weeks to reach our goals this season,” he said.

The Leopards got on the board first early in the bottom of the first inning to start the game.

In the top of the fourth, Pacific managed to finally get on the board.

La Verne answered right back in the bottom of the fourth inning.

After scoring a run in the fifth, the Boxers were within two and scored two more in the top of the sixth inning to take a 4-3 lead.

In the bottom of the sixth, Orona singled up the middle and scored junior shortstop Woody Reyes and junior center fielder Matt Caselli.

After a wild pitch, this allowed Watkins to score, as the Leopards took back the lead, 6-4.

Though they were in the lead, that was the last time they would score.

Pacific was able to find an offensive rhythm and took control of the game.

The Boxers came out swinging in the top of the seventh and eighth innings and scored seven unanswered runs.

“I felt we really didn’t come out to win a ball game today and when we actually got momentum on our side, we just let them back in and they just came out tougher than us,” Orona said.

The Boxers started with a double to right field by junior third baseman Cole Kanazawa to score Keithly.

Then junior center fielder Ben Duerr singled and was able to score Kanazawa and senior designated hitter Matt Hopp to take a 7-6 lead.

With a double to center by Duerr in the top of the eighth, this allowed Kanazawa and junior left fielder JT Francies to score.

The Leopards could not come back, resulting in an 11-6 loss.

“I think that there’s a little bit of everything that we could improve on,” Caselli said.

“We’re just not together as a team right now and not playing the way that we want to and the score clearly shows that,” he said.

In game two, sophomore designated hitter Jakob Thomas hit a two-run homer in the bottom of the second, kicking up the momentum for the Leopards.

Then in the next three innings, it was the control of the Leopards’ offense.

Junior centerfielder Nolan Henley hit a single through the middle and was able to score Reyes.

Then in the bottom of the fourth, Orona singled to left field, as he scored Caselli.

Despite the Boxers scoring in the bottom of the eighth, it was not enough, as the Leopards took home the 6-4 win.

Jebbia was on the mound and dominated.

He did not allow an earned run, struck out six players and only gave up two hits in six innings.

In game three, both teams battled it out to take a lead.

La Verne was able to take a 2-1 lead in the first inning, with a double by Jebbia that scored Thomas and Henley.

The teams offense rallied in their attempts to close out the game.

In the bottom of the fifth, Zach Quinones doubled down the left to score Jebbia.

Orona then singled to left center to score Quinones, 5-4.

The Boxers answered right back with two more runs.

White hit a three-run shot to left center to tie the game at seven in the bottom of the sixth.

Pacific managed to score three more runs, as they scored three runs and the La Verne offense was not able to answer back and the Boxers won the game, 10-7.

White and Jebbia went 2-for-5. The duo combined for five RBIs and two runs.

“We need to improve on being tougher and have a better approach at the plate,” Orona said.

“It seems like we’re probably the best team at being aggressive at the plate, but we need to improve our game all together, defense, offense and pitching,” he said.

With mistakes that need improvement, the Leopards know they have to pick it up if they want to keep their position in the conference.

“I’m looking forward to getting better at practice and get better in our game,” Caselli said.

“We just need to play better overall and once we do that and play to our ability, we should be able to be unstoppable,” he said.

The team is 15-10 overall on the season and 12-3 in Southern California Intercollegiate Athletic Conference play and sit in the first place.

“We definitely need to really pull together as a team and figure out what we’re doing because our offense is really sputtered here and we’re a better offense than that,” Winterburn said.

“We’re gonna have to iron things out on the practice field before next series offensively. I think if we get good starting pitch, it’ll set up our bullpen to be a little more effective,” he said.

The team will look to break their two-game skid, as they face the Occidental Tigers at 3 p.m. Friday at Anderson Field.

Then they will return to Ben Hines Field once again to face the Tigers in a doubleheader starting at 11 a.m. Saturday.