By Bailey Maguire, Sierra Dasher on April 3, 2015 in News 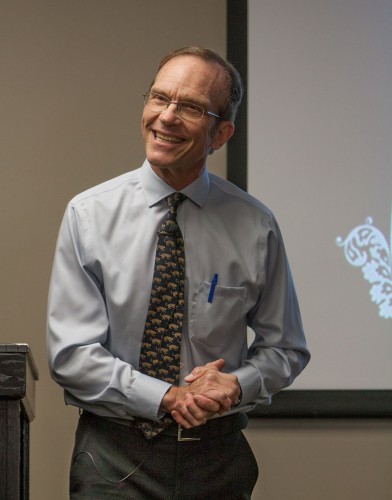 Al Clark, professor of humanities, presents “Oral History of the University of La Verne” as part of the La Verne Academy lecture series Monday in the President’s Dining Room. Clark explained the importance of oral histories. He included interviews with University of La Verne alumni, who attended the school more than 80 years ago. / photo by Bailey Maguire

Faculty and students gathered to listen to Al Clark discuss his ongoing project of recording and preserving the oral histories of people involved with the University of La Verne, Monday in the President’s Dining Room.

Clark, professor of humanities, introduced his oral history as a”candid” and “amateurish” recording of an individual’s personal stories, when compared to the professionalism of photojournalism and documentary filmmaking.

There is no staging when recording oral history, only the stories people have to tell are important.

“I enjoy the history of the area, I love the stories that people tell, and I love learning oral history,” Clark said.

History books cannot record every small detail, so many personal anecdotes and memories are lost when they are not preserved through oral history, he said.

Clark said oral history gives average individuals, in a specific time and place, their say in history. It records their memories and points of view for posterity.

Anyone can record oral history, according to Clark.

All that is needed is a recording device, surviving participants, adequate time and a quiet space, he said.

“I didn’t really know what oral history was and how they came to find it,” Alyssa Martinez, senior psychology major said.

“I guess before I just thought it was just people telling verbally, but it’s more extensive than that and it’s really interesting,” she said.

Clark got a tablet for Father’s Day in June 2013 and was inspired to use it to record the oral histories of people involved with the University of La Verne in January 2014.

He has gotten Institutional Review Board approval for his project and plans to document the history of the University through the memories of past students, professors and presidents.

Clark is also incorporating oral history into some of his classes, such as History 101: World Civilizations II.

In the class his students interviewed a family member that was knowledgeable about the emigration of their family to the United States as well as their migration around the country, so they were able to preserve part of their own family’s history.

“I’m thrilled he is teaching this in his classes and his students are learning about oral history and getting excited about that in their young ages,” Kathleen Lamkin, professor of music history, said.

Clark brought up the issue that the University is losing some of its surviving participants as the years pass, so he is trying to record as many stories as he can.

Hunter was able to recall distinct memories of her time as a student at the University of La Verne in a video interview.

In the interview, she remembered her college years when she and some friends were looking to borrow a car to go on a date with their boyfriends. They ended up asking past La Verne President William I. T. Hoover, and he lent them his car for the evening.

“It’s very exciting to get new information about things I was unaware of in this manner,” Clark said.

In the future, he is also thinking of creating a project dedicated to first-generation students to record their heritage.

“I think this is a project that is critical to the University of La Verne, and some of the ideas that Al Clark has later on about our students and getting their heritage and so on is a terrific idea,” Lamkin said.

Yehia Mortagy will speak on “ISIS, A Scholarly Analysis” at the next faculty lecture at noon on April 6 in the President’s Dining Room.

Sierra Dasher can be reached at sierra.dasher@laverne.edu.