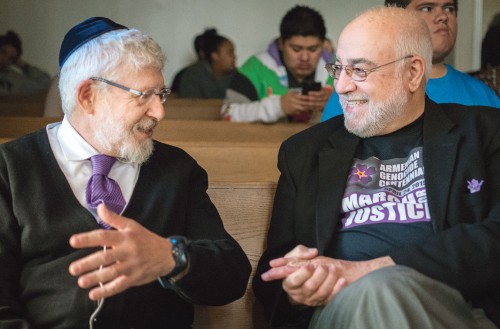 Rabbi Binymon Lisbon, kashrus administrator of the Kosher Supervision of America, and Aghop Der-Karabetian, professor of psychology, have a conversation before speaking in the Chapel on Tuesday for Holocaust Remembrance Day and the 100th anniversary of the Armenian Genocide. / photo by Helen Arase

The La Verne community gathered to honor Holocaust Remembrance Day, and to recognize the 100th anniversary of the Armenian Genocide Tuesday in the Interfaith Chapel.

More than 1.5 million Armenians were killed in the Armenian Genocide between 1915 and 1918; and approximately 6 million Jews as well as other persecuted people were killed by the Nazis during World War II.

Among the speakers were Aghop Der-Karabetian and Rabbi Binyomin Lisbon, whose family members were survivors of these genocides.

“They didn’t give up,” Lisbon said.

“They went through such a difficult life that is beyond words, and yet they still decided to start over again,” he said.

Both of his parents were previously married before the Holocaust began, and they lost everything including their spouses.

They were both taken to a concentration camp in Germany where they met each other, married and had their first son while living in the camp.

Lisbon told a story of officers going to his father’s home and killing his whole family.

His father was a strong man, so they decided to use him for work instead of killing him.

Lisbon believes that these stories should be told, because genocide could happen again.

“They don’t have a voice anymore, and today there are deniers everywhere,” Lisbon said. “I feel like it is important for the world to know that it could happen again, so when people talk about it at least there are first-hand stories.”

Der-Karabetian spoke next about the history of Armenian Genocide, also pointing out the significance of this day.

“Today is about justice,” Der-Karabetian said. “As much as it is about remembering those whose lives were taken in so many cruel ways.”

Though his grandfather did not die in the genocide, he witnessed many who suffered and lost their lives.

Der-Karabetian also said that many children were left orphaned and with nothing, and the Church of the Brethren offered their help and relief to those children.

Both of Der-Karabetian’s family members wrote memoirs on their experience.

The memoir “Vahan’s Triumph” written by his wife’s grandfather, Vahan Hamamd­jian, was translated by Der-Karabetian translated just a few years ago.

The room was filled with emotion, and students were able to feel a quiet moment. Many students left the event knowing how important it is to be informed and to let others know of the past.

“I think it is important for students to know what is going on in the world,” senior political science major Anthony Reyes said.

“It is important that we don’t forget the past, because when no one pays attention it is easy for people to just do the same thing,” he said.

Der-Karabetian said he wants the world to recognize that genocide is real.

It is important for every generation to learn and pass on these moments of sacrifice, and let these stories be told.