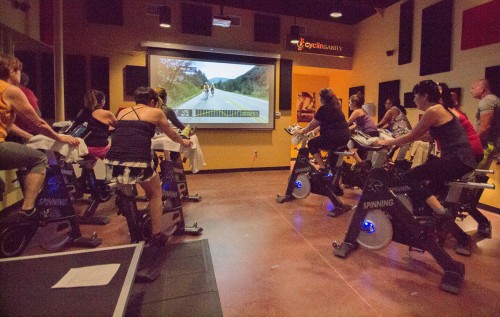 The members of Cyclinsanity in La Verne experience virtual cycling presented by epicRIDES. Virtual cycling classes are being introduced at fitness studios around the country. The Thursday class, hosted by Shirin Beckett, was the first class at Cyclinsanity to view locations such as Aspen, Colorado. The Aspen route is a 32 mile ride on Maroon Bells Road and Castle Creek Road. / photo by Jerri White

The class, taught by owner and cyclist Shirin Beckett, is a workout for the mind and body. Beckett teaches the science behind spin classes and gives inspiration for outside obstacles.

“Every hill is a challenge, every challenge is an opportunity, think what could happen if you say yes,” Beckett said.

I participated in the intro cycling class on Saturday morning, which focused on helping new cyclists adjust to riding an indoor, stationary bike.

“The saddle will speak to you. It will be uncomfortable,” Beckett said. “But that is only for the first or second ride, then you adjust.”

The first ride was slow and steady, so new riders, like me, felt comfortable and safe on the bike and in the studio. It was an easy ride, but I still walked away feeling confident and accomplished.

“I wanted a place that was a sanctuary, a safe place without injury, without intimidation,” Beckett said.

Now that I understood the basic concepts of indoor cycling, I was ready to take the strength training class. Five other riders and I, pushed our limits during the hour-long spin class. Ten minutes into the workout, everyone was sweating. It seemed amazing that we had just started. We then had an endurance hill that tested our stamina and laid the foundation for the rest of the class.

“I thought I was going to die, but I feel accomplished, I wanted to quit, but I didn’t,” said West Covina resident and indoor cyclist Raylinda Perez.

After three minutes of going up a hypothetical hill, while slowly adding resistance and maintaining speed, it was a back and forth battle between recovery periods and strength training sets. The green, yellow, orange and red wheels above us symbolized the percentage of effort we were emitting while spinning.

While everyone’s progress was on the screen in front of us, Beckett was constantly reminding us that we were not competing against each other.

“It’s not about competition, it’s about progress. It’s a feeling of empowerment,” Beckett said.

She mentioned cycling once a week is better than nothing, but it will be a long road toward progress.

“All her rides are fabulous, a good workout physically and mentally,” Claremont resident and indoor cyclist Maggie Madorsky said.

“If fitness is important to you, this is the place to come, it is empowering to the mind.”

Cyclinsanity opened in January and although it is a new business, there is an influx of steady spinners.

Many of the cyclists have followed Beckett here from her previous studio.

“It’s not a hobby, it’s a passion,” Beckett said. “Their job is to get here, to get through the door, it’s my job to get you through the next hour.”

Beckett has been indoor cycling for 10 years. Previously she was an ultra-runner, meaning she would run farther than the average marathon. Cycling has less impact on knees and joints, making it an alternative workout to running. It also has the same health benefits, such as endurance training, cardio and strength training, Beckett said.

Cyclinsanity has five instructors including Beckett. The instructors were selected based on experience and knowledge, and many have a background in athletics and physiology.

Beckett also takes pride in the advanced technology that Cyclinsanity uses. There are monitors that show the progress of the cyclists and email them their results. They also use an online system to sign up for classes and reserve specific bikes. Beckett’s goal is to educate the community and give them options of how to stay healthy.

For information about classes and pricing visit cyclinsanity.com.

Correction
In the original version of the story “Cyclists pedal way the pounds” (April 10), Shirin Beckett’s cycling experience was misstated. She has been cycling indoors for 10 years, not 18 years. The Campus Times regrets the error.