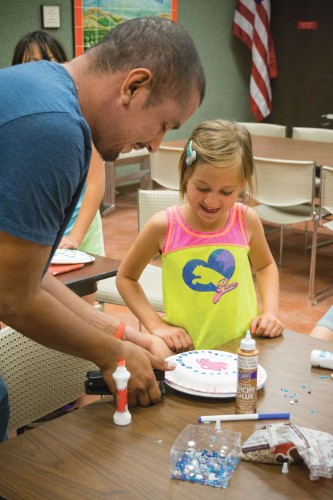 The University of La Verne’s professional music fraternity Mu Phi Epsilon brought local children music and allowed them to create their own tambourines and maracas at its Build Your Own Instrument event Saturday at the La Verne Library.

The instruments were created from stapled plates and empty water bottles filled with beans.

“My kids love crafting, so anything they can do with their hands, they love,” La Verne resident Heba Baroudi said. “They’re going to give me a hard time now with these tambourines.”

Stickers, markers, sequins and other craft supplies were available for children to use to decorate their tambourines and maracas.

Eight children and four parents attended the event and made instruments with Mu Phi Epsilon.

The musical event was free to the public and crafting occurred in the multipurpose room of the library.

They helped children construct, decorate and craft their tambourines and maracas.

“It’s really fun to get to work with the kids and get to see them having fun making music and being creative,” Eager said.

The music event was organized by Thai as part of her duties as service chairwoman.

“I believe in service and giving back to the community and we wanted to give back to the kids,” Thai said.

Thai organized the event to correlate with the library’s reading program.

The program currently focuses on the rhythm of music.

“We wanted to plan a music making event for (the children) so that they could get more exposed to music and help them influence music in their life,” Thai said.

The fraternity hosted an event April 4, where children made maracas out of empty water bottles with Skittles for Easter.

The Skittles were an added touch for a sweet Easter treat, Thai said. However, only a few parents and children attended due to Easter weekend.

Eight Mu Phi Epsilon members helped the children and parents at that event.

Mu Phi Epsilon frequently hosts an array of music events to promote musical education at the University and throughout the community.

“Part of our purpose is to bring music to the community,” Eager said.

The Zeta Delta chapter of Mu Phi Epsilon was installed at La Verne in 2007.

The co-educational, professional music fraternity strives to advance music in the community, nation and throughout the world.

Letters to the Editor
Adjunct pay is not sustainable