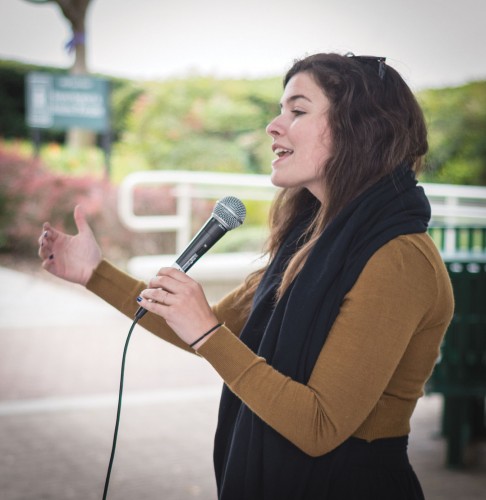 Gia Karpouzis, junior political science, philosophy and speech communications major, debates with fellow team members in the Johnson Family Plaza Tuesday. Karpouzis and her teammates argued about the cost of education, the public’s right to access lectures and information taught in universities and other controversial topics regarding higher education. / photo by Daniel Torres

Three University of La Verne students debated the pros and cons of having free higher education Tuesday in the Johnson Family Plaza.

The debate team joined forces with the Academic Success Center to discuss different views on education and to promote the ASC’s services.

The discussion allowed all students to participate and share their opinions alongside the debaters.

Senior gender, law and policy and speech communication double major Melanie Nadon spoke about how higher education should be free because it is a public good and a human right.

“We want a society where money doesn’t dictate politics and right now it dictates that through our Supreme Court decisions,” Nadon said.

She said governments should have a vested interest in making higher education free because with a higher education people have more ideas, more innovations and more inventions to move society forward.

Nadon explained that while there is certain access to education now, it is not enough. Some people only get their bachelor’s degree because they cannot afford the extra debt to further their education. Other people do not attend universities at all.

It is difficult to participate in democracy if you do not have access to all the information to understand what impact your decisions may make, she said.

“When you have the pressure of a student debt or tuition, you kind of think, ‘Oh, maybe I should do this a little more quickly because maybe it actually matters what my time is because there is such a thing as time currency,’” Karpouzis said.

She said German universities made higher education free for everyone.

As a result, a valuable education is decreased because professors have less time to focus on individuals because of greater class sizes to accommodate more students.

Karpouzis gave the statistic that over half the university graduates in the United Kingdom are working jobs they are overqualified for because there are too many people with college degrees flooding the job market.

“When things are free, people kind of freeload,” Karpouzis said.

She said that in Germany there is a term for the “eternal student” and that the average age for graduation is 28 years old.

“The United States is already leaning toward what we call the five year degree and that’s with universities being paid,” Karpouzis said.

She said even if everyone wanted education to be free, it can never actually be free.

Germany has the second highest income tax bracket in all of Europe to allow free higher education, resulting in an 11 percent increase of emigration rates to outside of Germany in 2013 as opposed to 2012, Karpouzis said.

Senior public affairs and speech communication major Natalie Holland questioned Nadon and Karpouzis about why people make higher education a right when higher education is something an individual decides for herself to either opt into or not.

She said that is why other countries have things like vocational training.

The debate also discussed other topics such as making learning material free for everyone and forgiving student loans after 10 years. “They had good points like how important it is to be involved and the loan structure, like when you started here you didn’t know anything about it but the longer you’re here, the more you know about it…so you can speak up about it,” said Ebony Williams, assistant director of the ASC.

The debaters did not choose their own topics or stances and used 15 minutes to prepare for their arguments.

“The countries that I know (give free college education) have had pretty successful outcomes so I don’t think I would have any complaints if I could go to this school for free,” said Emma Saturday, sophomore English major and writing tutor for the ASC.