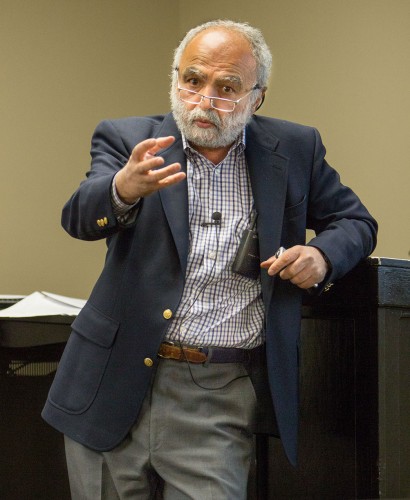 Yehia Mortagy, professor of information technology and decision science, presented “ISIS, A Scholarly Analysis” about the evolution of the Islamic State of Iraq and Syria and how the United States is dealing with the group. Mortagy’s presentation was part of the faculty lecture series Monday at the President’s Dining Room. Mortagy talked about the alternative approaches the United States should take in order to deal with the growth of ISIS. / photo by Jolene Nacapuy

Professor of Information Technology and Decision Science Yehia Mortagy presented a scholarly analysis on the Islamic State of Iraq and Syria in his faculty lecture Monday in the President’s Dining Room.

The duo explained that societies have different values, but when they hold those values against others who do not share the same belief system, problems arise.

“It’s not just ISIS. Boko Haram and the rest of those groups are absolutely dangerous threats to not only the Middle Eastern communities where they are, but also to humanity in general,” Badger said.

Badger highlighted some reasons people have been driven to join ISIS, including lack of individual economic opportunity, no sense of personal pride, no deep sense of belonging and little contentment and joy in life.

Mortagy explained that in order to respond to ISIS, we must first understand what ISIS is. He claimed that if we were to leave the members of ISIS alone and let them control a piece of land and govern it, they would most likely self destruct.

“I think they outlined a different approach than what the United States is currently taking and I think it’s feasible,” sophomore biology major Tanner Long said. “The most interesting part was the analysis on the social media aspect of ISIS because everyone generally knows it’s out there but in terms of approaching it, no one really addresses that.”

Badger suggested that there is a need for more intensive military counterterrorism actions on the part of Middle Eastern countries and Muslim communities against radicalized terrorist movements.

He claimed that it was only through such measures that there could be hope for the beginnings of a peaceful and prosperous climate for people of all faiths living throughout the Middle East.

Mortagy pointed out that the terrorist groups that are overrunning the Middle East should not represent Islam and that he does not believe they do.

While some students thought the lecture was interesting and informative, others wished they had expanded their topic to include other issues as well.

“They should have talked about U.S. intervention in Afghanistan and other places in the Middle East where things have gone bad and good before, especially when they were advising that we should implement social programs and social reforms,” sophomore biology major Kandin Maraquin said.